The World’s Favourite Songs to Cry to in the Shower Revealed!

With the winter blues drawing in and the pandemic still lurking in the darkness, it’s safe to say we’ve all warranted a cry over the last few months. With this in mind, showers and bathroom suppliers Showerstoyou.co.uk wanted to find out where we spend our tearful moments and what we listen to most when we’re blubbering.

After trawling through nearly 10,000 songs from Spotify’s playlists Showerstoyou found that 74% of people said that if they need to have a sob, they’ll save it for the shower – at least you’re saving on tissues.

Recommended AI News: AI And Machine Learning Technologies At The Center Of The COVID-19 Contactless Economy

The Top Three Songs to Listen to When Crying 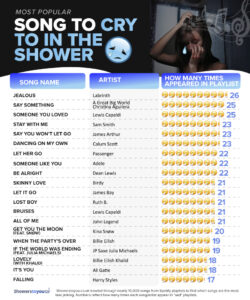 The top song to listen to when you need a good old cry is Jealous by British singer and songwriter Labrinth.

This song was listed 26 times across all playlists – making it the top tearjerker.

Number 2: Say Something – A Great Big World & Christina Aguilera, and Someone You Loved – Lewis Capaldi

Number 3: Stay With Me – Sam Smith, Say You Won’t Let Go – James Arthur, and Dancing On My Own – Calum Scott

Sharing the third spot is Stay With Me – Sam Smith, Say You Won’t Let Go – James Arthur, and Dancing On My Own by Calum Scott.  All three of these tearful tunes had 23 placements across all playlists.

British singer Sam Smith appeared in the top five for songs and artists most featured!

Sitting at number 20 is the flamboyant stylings of Harry Styles, with his emotional hit Falling – placing 17 times across all playlists.

Recommended AI News: Top 10 AWS News And Updates During The COVID-19 You Should Know About

The Top Five Artists to Listen to When Crying 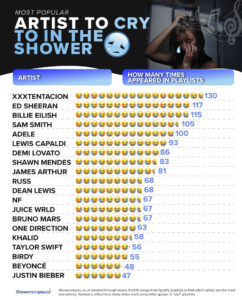 The multitalented rapper, singer, and songwriter XXXTENTACION comes in at number one as the most popular artist to listen to when you feel like you want to have a cry.

130 citations were made to this artist across all playlists analysed.

The world’s favourite red headed ballad writer, Ed Sheeran comes in at number two with 117 mentions across all playlists – with such belters like ‘Thinking out Loud’, ‘Perfect’, and ‘I See Fire’.

America’s grunge princess herself, Billie Eilish ranks third with 115 references through all playlists.

Coming in fourth place is Sam Smith with 105 placements through all the playlists analysed. Known for their power ballads, it’s no wonder the British singer won themself a place in the top five.

English singer-songwriter Adele ranks fifth with 100 citations throughout all playlists, with tear jerking tracks like ‘Someone Like You’, ‘Make You Feel My Love’, and ‘Hello’.

Unfortunately for Bieber fans, JB came in at number 20 as the most popular artist to listen to when you need a good cry.

Upland Partners With EOS Authority And ClimateCare To Highlight…