Mark Zuckerberg vs Jack Dorsey – A War About Freedom, Politics, and Cryptocurrency

Facebook and Twitter were born during the late 2000s. Although, both were social media platforms they were different in terms of ideologies and what was the respective vision of founders of both behemoths. A major difference between Facebook and Twitter emerges in their methods of communication. Facebook was more passive, whereas Twitter seems a much more active form of social communication. In simple words: Facebook gave you friends, while Twitter gave you followers. What was common was the ideology of respective founders that shaped their respective companies forward. Facebook’s Mark Zuckerberg envisioned to give people the power to build community and bring the world closer together. Twitter’s Jack focuses on giving people a platform to express freely and giving a voice to everyone to impact the world.

Facebook and Twitter achieved its significant place and it only matters how well each of these two companies will withhold its respective place. Sadly, for Facebook, it was turning to be difficult than Twitter. One of the fundamentals aspects of the social media platform was: user privacy, and Zuckerberg’s Facebook was always on the wrong end of the spectrum. Facebook got caught in one of the biggest privacy scandals – the Facebook-Cambridge Analytica Data scandal revealing that Cambridge Analytica, a Data Analytics company, had collected personal data of millions of Facebook users without their consent and used it for manipulating political sentiments. This scandal severely tarnished Facebook’s image with its users and major governments around the world. 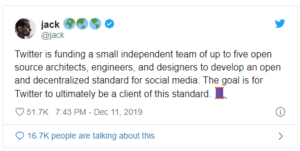 Jack Dorsey, the idiosyncratic CEO of Twitter and Square, announced that Twitter is funding a five-person team to work on a decentralized social media standard, dubbed Bluesky. TWTR is up 2.2% on the news.

With decreasing the user base of Facebook, it strategically started acquiring social media related platforms – Whatsapp, Instagram, etc. to stay ahead. Facebook is planning to expand and leap into a broader money/financial product category after noticing the relevance of cryptocurrencies. In September 2019, Facebook announced its plans of launching a stable coin named Libra, with a consortium of 100+partners – Visa, Mastercard, etc. However, it was not well received by the SEC (Securities Exchange Commission) in the USA. Due to the backlash, many of the notable companies backed out for intermittent time till the project gets complete regulatory clarity by the state.

On the other hand, Twitter is following a different route. Jack is of the idea that the Internet is already becoming its nation-state and it is already forming its currency – Bitcoin. He believes in harnessing the potential of Bitcoin in its raw form. Due to this reason, Jack is heading CashApp and also invested in bitcoin-oriented start-ups Lightning Labs. Jack is also backing crypto initial coin offering (ICO) platform, CoinList, with a reason that the current crypto industry needs a trustworthy platform for launching new projects.

Mark and Jack are both aiming higher and are expanding their companies on a broader level outside of the social media spectrum. It will be interesting to see how both of them will take it forward and how far Facebook and Twitter go from here.

Read more: “Bitcoin Has No Intrinsic Value”. Then What Gives Bitcoin Value?

CoinDCX is India’s largest cryptocurrency trading platform and liquidity aggregator, providing access to massive global liquidity from the world’s leading crypto-exchanges, including Binance, HitBTC, and Huobi Global. Established in 2018, the platform is today deemed by many market participants as India’s most trustworthy cryptocurrency trading platform.

Addressing the Challenges of Adopting AI in Healthcare