What is the Urban Rail Cloud, and how can Huawei’s solution be applied to 5G IoT Urban Mobility Solutions?

Currently, urban rail transit in China is continuously expanding. In many cities, metro construction spans over a long period and, when completed, lines come into operation quickly. However, the opening of a new line increases difficulties in the operation and management of the entire metro network, posing great challenges to ICT infrastructure.

This is a graphical representation of how the Urban Rail Cloud works: 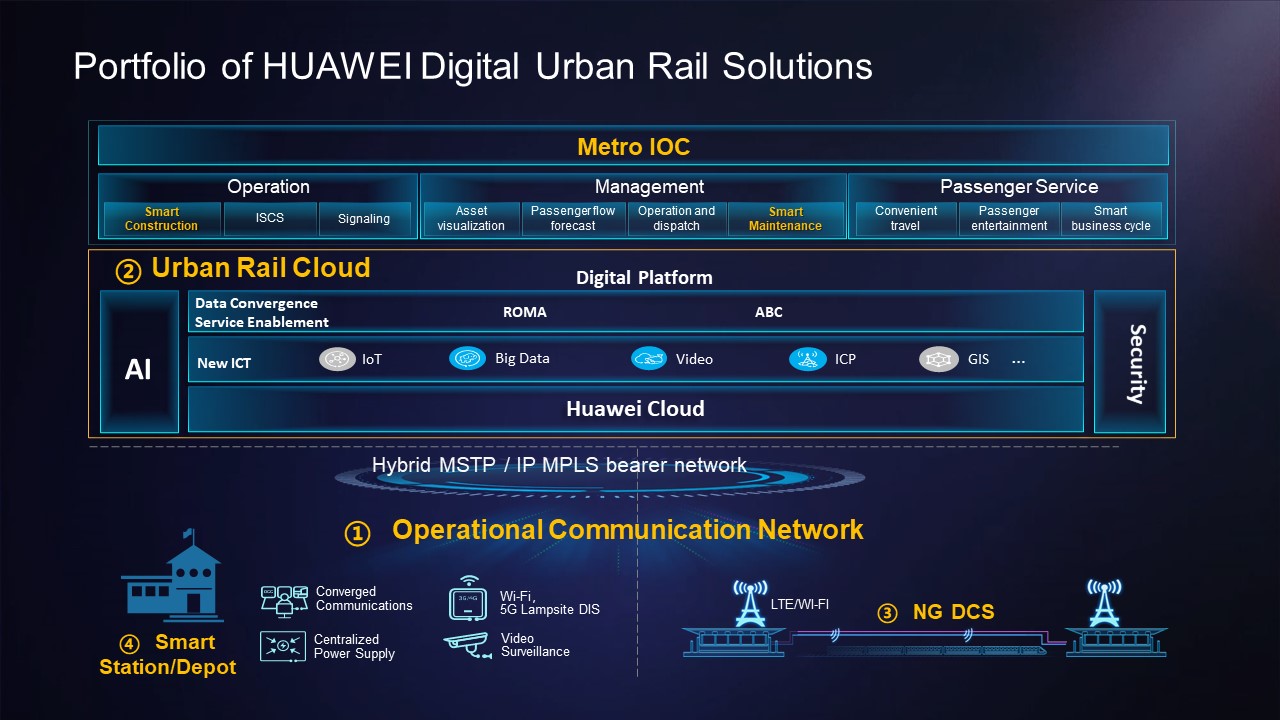 In a network-based environment, the service processes and operation rules need to be unified to standardize service management, thereby improving efficiency and reducing operations costs. In addition, it also requires the unified deployment of service applications and centralized data management. As for urban rail, it has become necessary to use emerging technologies to implement cloud-based and digital transformations.

Earlier in August, Shenzhen Metro Lines 6 and 10 were officially opened to the common public in China. They became the first urban mobility services to comprehensively apply Huawei’s Urban Rail Cloud Solution in China, as well as the first batch of metro lines with full 5G coverage in Shenzhen. They also created a record in the rail transportation industry to use artificial intelligence (AI), Cloud Computing and Big Data technologies to handle various metro service systems in an intelligent Horizon Digital Platform.

Line 6 of the Shenzhen Metro is 49.4km-long with 27 stations, starting at the Science Museum, then traveling through Futian, Luohu, Longhua, Guangming and Bao’an, before ending at Songgang Station. This line will not only greatly benefit public transport, but, most importantly, also benefit the development of the Guangming and Hualong Districts and will accelerate economic integration.

10 begins at Futian Port Station and passes through the central area of Futian and Meilinguan, along the central development axis to Banxuegang Science and Technology City. Line 10 is 29.31km-long, with 24 stations, and is the first line in Shenzhen that uses eight-carriage A-series trains in both northern and southern directions. It takes only 45 minutes to travel from Futian Port to Pinghu on Line 10, which relieves traffic from the Futian central area to Bantian. The line provides new access between Pinghu, Banxuegang, Huawei New City and Meilinguan East; promotes the development of the high-tech innovation area; and facilitates the construction of the Guangdong-Hong Kong-Macao Greater Bay Area.

Line 10 will effectively alleviate long-suffered heavy congestion, particularly during peak hours, in Meilinguan. A strong focus was given to the agility of the implemented technology, allowing the operator to maintain services even under the most challenging conditions.

Since planning began, Shenzhen Metro Line 10 has been entrusted with connecting the north and south of the city, sharing the pressure of existing metro lines and balancing the passenger traffic of the urban road network. Further optimization and innovation are required in security and running efficiency to ensure that these goals can be fulfilled.

To address these challenges, Shenzhen Metro adopted Huawei’s industry-leading Urban Rail Cloud Solution, where Cloud Computing, Big Data, 5G/ IoT and Artificial Intelligence (AI) are leveraged to build a unified, open and intelligent Horizon Digital Platform for urban rail. This not only provides comprehensive support for rail operations and management but also brings a brand-new experience to the public.

On top of providing passengers with a unique Internet access experience, the 5G network can also benefit metro construction, production, operations and management.

China’s urban rail industry has successfully implemented cloud computing, delivering an innovative set of urban rail cloud applications. Cloud-based urban rail services have gradually evolved from a single domain to multiple ones. Customers have also increasingly realized the value of these applications. Urban Rail Cloud is being deployed and promoted in both cities with existing large-scale multi-line networks – such as Beijing, Shanghai, Guangzhou, Shenzhen and Wuhan – as well as those only starting to build metro lines – for example, Hohhot and Taiyuan.

ROKIT Healthcare to Enable Innovation in Treatment of Diabetes Foot and…