In a breakthrough, Tokyo Tech researchers have managed to observe and characterize dynamic assembly of metallic atoms using an ingenious combination of scanning transmission electron microscopy and a video-based tracking. By visualizing short-lived molecules, such as metallic dimers and trimers, that cannot be observed using traditional methods, the researchers open up the possibility of observing more such dynamic structures predicted by simulations.

Chemistry is the study of bond formation (or dissociation) between atoms. The knowledge of how chemical bonds form is, in fact, fundamental to not just all of chemistry but also fields like materials science. However, traditional chemistry has been largely limited to the study of stable compounds. The study of dynamic assembly between atoms during a chemical reaction has received little attention. With recent advances in computational chemistry, however, dynamic, short-lived structures are gaining importance. Experimental observation and characterization of dynamic bonding predicted between atoms, such as the formation of metallic dimers, could open up new research frontiers in chemistry and materials science.

However, observing this bond dynamics also requires the development of a new methodology. This is because conventional characterization techniques only provide a time-averaged structural information and are, thus, inadequate for observing the bonds as they are formed. 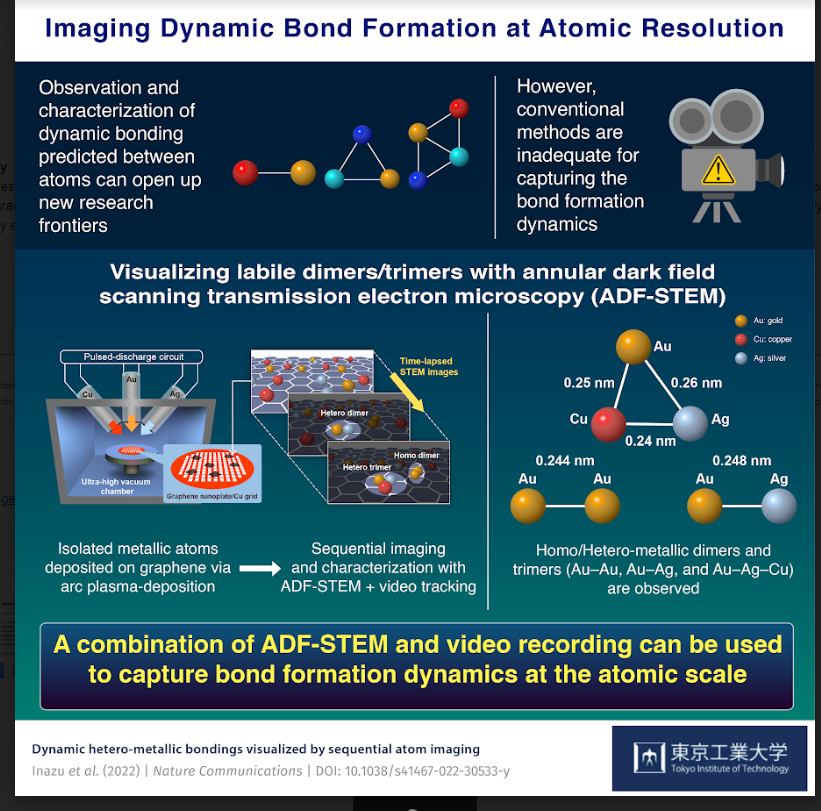 Against this backdrop, researchers from Japan led by Associate Professor Takane Imaoka from Tokyo Institute of Technology (Tokyo Tech) has now provided an ingenious solution. In their study published in Nature Communications, the team used a combination of video tracking and a technique called “annular dark field scanning transmission electron microscopy” (ADF-STEM) to perform sequential imaging of different metal atoms interacting with one another. This allowed them to directly observe transient structures resulting from an assembly of two similar atoms (homo-metallic dimers), two different atoms ( hetero-metallic dimers), and three different atoms (hetero-metallic trimers).

The team began by depositing atoms of atoms of gold (Ag), silver (Ag), and copper (Cu) on a graphene nanoplate using a method called “arc-plasma deposition.” To ensure that enough isolated single atoms were available, the deposition was limited to approximately 0.05-0.015 monolayers and high-magnification observations were performed on the flat regions of the graphene substrate.

Reform or Perish: Sales Cycles can No Longer Function with Poorly Targeted Outreach

“The elemental identification of the atoms was available with real-time tracking of the moving atoms, while ADF-STEM allowed the atoms to be observed under electron dose. This helped us avoid high current densities typically needed for single-atom analysis, which can cause material damage,” explains Dr. Imaoka.

“Although our snapshots did not perfectly agree with the structures predicted by theoretical calculations, the average bond lengths between the elements in the observed structures are in good agreement with the calculations,” says Dr. Imaoka.

The remarkable findings of this study could lead to rapid developments in nanoscience, where the characterization of metal clusters and sub-nanoparticles is gaining importance, and, in the process, open doors to a completely new realm of matter.

Reform or Perish: Sales Cycles can No Longer Function with Poorly Targeted Outreach

Jun 23, 2022
Prev Next 1 of 212
Follow Us
You cannot print contents of this website.
We store cookies on your computer to improve your experience and provide more personalized services, both on this website and on other sites. For more information about the cookies we use, see our Privacy Policy. We won't track your information when you visit our site. We will have to use at least one cookie to ensure that you won't have to make this choice again.AcceptDeclinePrivacy Policy