The Environmental Impact of Your Favorite Movies And Shows

In addition to crushing the bandwidth spectrum, these online content services like Netflix also have an environmental impact.

Netflix, for many subscribers, is a staple past-time. It has grown to become a popular Online Video Content behemoth. Given the most unfortunate times that we are currently in, more people than ever before are going to be reliant on online content services such as Netflix to provide them with a much-needed distraction from the coronavirus crisis. We already know that various Telcoms are requesting online content service providers like YouTube, Netflix, Amazon Prime, and Hotstar to downgrade from HD to SD formats.

Clearly, the Telcos are facing the brunt of the COVID-19 trap, which has forced people to lockdown themselves to home. Telcos are not alone. In addition to limiting the bandwidth spectrum, these online content services also have an environmental impact.

Read Also: How To Avoid Tone-Deaf Marketing In Uncertain Times

There has been a multifold increase in the consumption of Energy, and Water as well. But, we will stick to energy consumption for now.

But, are we aware of how energy-intensive streaming is and its ‘environmental impact’?

For an individual to stream video content, it must travel through a complex network (i.e. cables, routers, data centers, etc.) that runs on vast sums of electricity. This electricity, in turn, generates carbon dioxide (CO2) – which can leave a devastating impact on the environment.

According to an online source, Netflix is downgrading its services to mitigate bandwidth issues, already, and this may not be a bad idea. Customers prefer to watch online video content in HD. SD content may force users to simply shut their screens off. Hypothetically, speaking.

Streaming Netflix Movies: The impact on the Environment

Interested in the carbon footprint from streaming, energy comparison site SaveonEnergy utilized official viewership figures to discover what watching Netflix’s top original movies and shows are equivalent to in terms of miles driven by a car, and the amount of carbon dioxide (CO2) emitted. 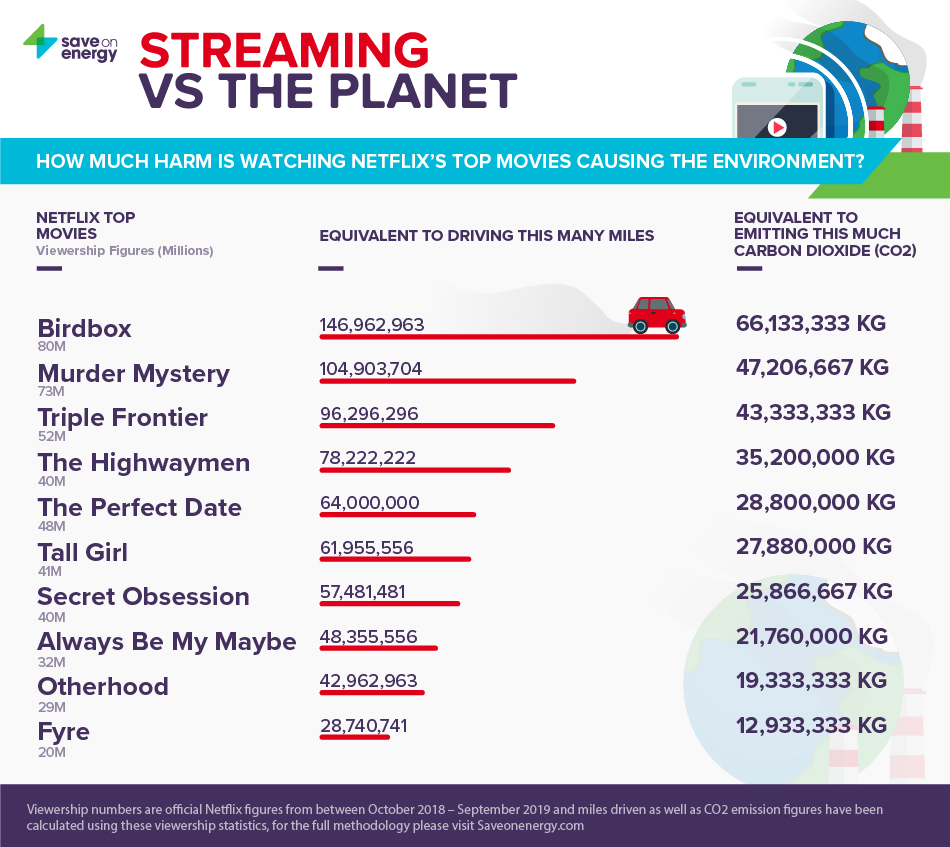 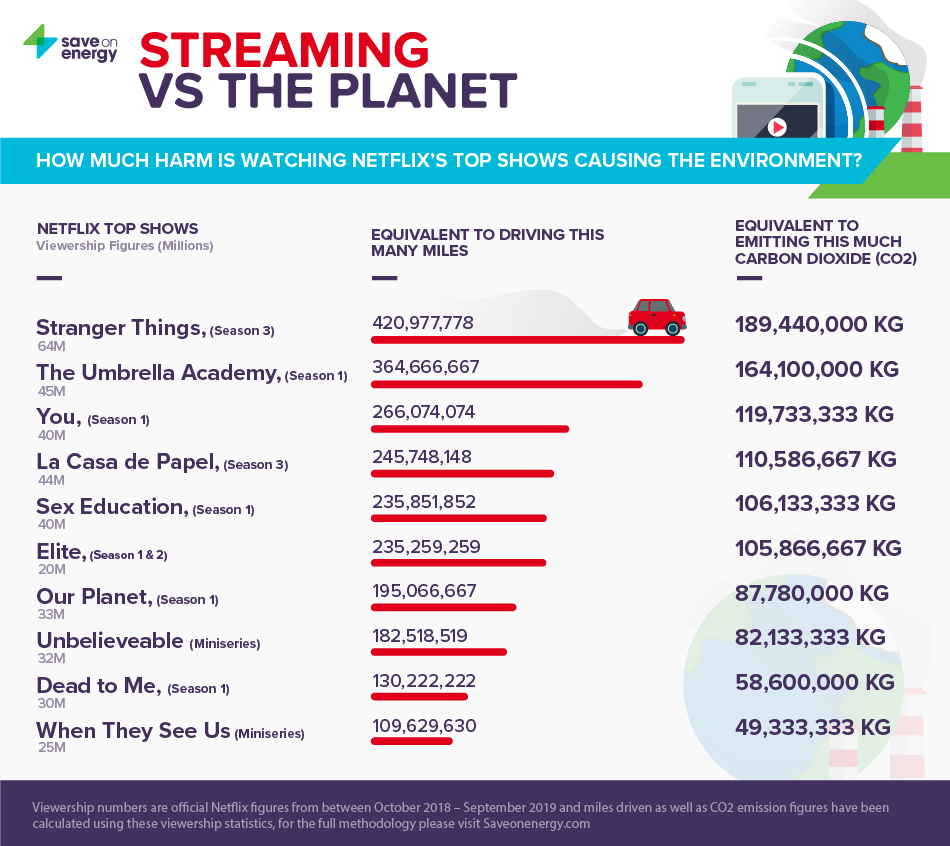 Save on Energy found that the energy generated from Netflix users’ total 80 million views of the thriller ‘Birdbox’ is the equivalent of driving more than 146 million miles and emitting over 66 million kg of CO2.

To put that into context, the equivalent of driving from London (United Kingdom) to Istanbul (Turkey) and back 38,879 times.

The energy produced from 73 million streams of Adam Sandler’s ‘Murder Mystery’ translates to driving over 104 million miles and emitting more than 47 million kg of CO2.

Saveon Energy also clarified that it should be noted that Netflix measures viewership as one-member account watching at least 70% of a movie or episode of a show (this is the measure Netflix used to count viewership between October 2018-September 2019).

Since taking a return flight from London (United Kingdom) to Los Angeles (United States) creates 1,650 kg of CO2 per person – this means an individual needs to fly 28,610 times from London to Los Angeles and back to produce the same amount of CO2 amassed by every Netflix user who has watched ‘Murder Mystery’.

Saveon Energy discovered that the energy accumulated from the 64 million streams of ‘Stranger Things’ season three is comparable to driving more than 420 million miles and emitting over 189 million kg of CO2.

This is effectively driving from Marrakech (Morocco) to Cape Town (South Africa) and back 28,391 times.

Subsequently, the energy garnered from 45 million views of the ‘Umbrella Academy’ season one, translates to driving more than 364 million miles and emitting over 164 million kg of CO2.

Netflix and AI: Netflix Is Blending Artificial Intelligence for Its Content Distribution

Flying from London to Perth and back produces 3,153 kg of CO2 per person – this means an individual would need to fly 52,046 times from London (United Kingdom) to Perth (Australia) and back to produce the same amount of CO2 generated from those who have watched ‘Umbrella Academy season one’.