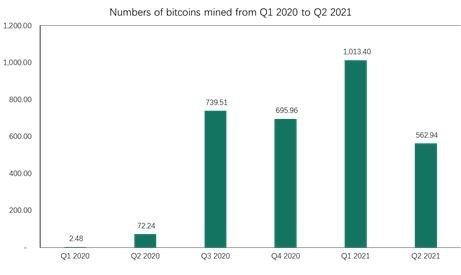 Following the recent announcement of the Chinese government’s decision to ban bitcoin mining, the Company immediately suspended its remaining mining operations in mainland China, effective June 21, 2021. Accordingly, we further accelerated our migration strategy to North America, which had been ongoing since October 2020. As a result, a greater proportion of the Company’s fleet was offline than in the prior quarter, due to more miners being in transit to or awaiting installation in North America.

During the quarter, the Company shipped 14,500 miners to the United States. The Company expects to complete the migration of its remaining China-based miners to North America early in the third quarter of 2021.

The following table represents our miners’ geographic locations as of June 30, 2021:

Miner Geographic Distribution as of June 30, 2021

During the quarter, the Company signed two new hosting agreements in North America, representing 60 megawatts of additional hosting power capacity. As of June 30, 2021, the Company believes it had secured the majority of the hosting capacity required to complete the redeployment of its remaining China-based fleet in North America. The Company continues to evaluate additional hosting arrangements with existing and new partners in North America, to secure additional capacity and in anticipation of an expected increase in our spot market miner purchase activity and growth of our miner fleet in the coming months.

In the second quarter of 2021, Bit Digital earned 562.9 newly minted bitcoins, a reduction from 1013.4 earned in the first quarter. The reduction was due to the aforementioned acceleration of the Company’s miner migration strategy, as well as fleet repositioning in which the Company sold or disposed of certain miners. Bitcoin production is expected to increase following the completion of the migration, which is expected during the third quarter of 2021, and upon completion of anticipated miner purchase activity.

The Company’s quarterly bitcoin production since the commencement of our mining operations was as follows:

As of June 30, 2021, the Company owned 32,500 miners, with a total maximum hash rate of 1.92 EH/S, a decrease from 40,965 miners and 2.26 EH/s as of March 31, 2021. The reduction was due to sales and disposals of certain older miners, partially offset by miner purchases, as further discussed below. The Company’s fleet of owned miners comprised the following models:

The Company anticipates a significant opportunity to purchase additional miners on the Chinese spot market at attractive prices, potentially in substantial volumes, in the coming months, and continues to closely monitor market conditions for such purchase opportunities. Due to spot market disruption following the Chinese government’s ban of bitcoin mining in June 2021, the Company believes there have been significant spot market pricing reductions, and anticipates an opportunity to make further purchases of newer-vintage miners in the coming months, subject to market conditions and capital availability.

During the quarter, we began to reposition our fleet by selling 11,608 miners that were deemed to have a lower expected return on invested capital than miners we anticipate purchasing in the near future, and/or were deemed unsuitable for long-distance migration to North America. The sold miners included 8,410 Bitmain T17, 1,525 MicroBT M21S, 1,346 MicroBT M20S, 195 Bitmain S17E, 100 MicroBT M31S, and 32 Bitmain S17 Pro models. The Company recorded a small gain on these sales, in aggregate. We intend to reinvest the net sales proceeds of $5.4 million into purchases of newer, more efficient models in the coming months.

During the quarter, we abandoned 372 miners in mainland China that were deemed to have reached the end of their useful lives, were no longer operational, and/or would have been uneconomical or impossible to repair. The disposed of miners included 320 MicroBT M21S, 42 MicroBT M20S, and 10 MicroBT M10 models.

“Bit Digital faces an unprecedented opportunity to scale its miner fleet,” said Bryan Bullett, Bit Digital’s CEO. “This is driven by the historic disruption, in which we believe that bitcoin mining equipment is flowing onto the Chinese spot market in large volumes, in the aftermath of China’s recent shutdown of the sector.”

“Bit Digital is uniquely positioned to acquire these miners at scale. Headquartered in New York and led by a primarily US-based management team, to our knowledge, Bit Digital is the only US-listed miner with deep relationships among the major former Chinese operators. Our team on the ground in China is positioned to source equipment and transact with reputable counterparties rapidly, at scale. As an illustration of this capacity, the Company grew to its current position as one of the largest US-listed miners, primarily through several large spot market purchases.”

“We have been successfully shipping large quantities of miners purchased in China and redeploying them in North America since October 2020, and the recent regulatory change in China served as a catalyst to significantly accelerate our miner migration program. Bit Digital is fortunate, in that we already have in place the logistical and technical know-how and relationships that we believe will enable us to fully complete the migration during the third quarter.”

“We are also fortunate to have already built strong partnerships with several high-quality hosting providers in North America. Working with these existing and new hosting partners, we secured 60 megawatts of additional capacity, which we believe represents the majority of additional hosting needed to fully accommodate our current fleet migration to North America. We are also in discussions with multiple parties to further expand hosting capacity, and to facilitate new deployments for anticipated miner purchase activity.”

“We also used the accelerated migration as an opportunity to reposition our miner fleet, selling machines that we deemed to represent a lower expected return on invested capital than newer-vintage machines that we anticipate purchasing in the near future, at attractive prices. As part of this repositioning, we culled the majority of our Bitmain T17 miners, which in our view was among the less desirable models in our fleet. We generated a small gain on these sales, and intend to reinvest the net proceeds into purchases of newer, more efficient models.”

“Our co-founders had the foresight to acquire miners on the Chinese spot market at scale, assembling one of the largest US-listed miner fleets, and to begin the process of migrating those miners into North America, well in advance of potential regulatory changes in China. Those regulatory changes have now come to pass, and we believe that Bit Digital is now uniquely positioned to emerge as a sustained leader in the US-listed mining sector, with its operations expected to be entirely North America-based in the near future.”

Samsara Partners With EVgo To Accelerate The Transition To Electric Vehicles