The ability for anyone to print true three-dimensional holograms at home or in an office is one step closer to reality. LitiHolo – a global leader in hologram technology and production – unveiled its Desktop 3D Hologram Printer – the world’s first of its kind. 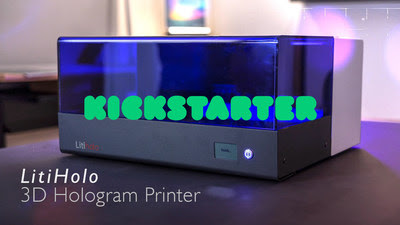 LitiHolo’s Desktop 3D Hologram Printer produces true holograms that can be seen without headsets or glasses, offering a unique 3D viewing that can easily be shared and viewed with others. This means users can print everything from hologram portraits to 3D computer graphics scenes that can be viewed as true three-dimensional holograms.

The Desktop 3D Hologram Printer takes multiple perspective images, captured from a camera, video footage, or rendered from a typical 3D graphics design, and slices them into unique recordings for each individual pixel on the hologram, called a “hogel” or “hologram element.” The printer then optically encodes that hogel information with laser light onto the special hologram film. When complete, the hologram recreates the many different perspectives as if the 3D image is truly there, giving the ability to look around the image to see different angles, even above and below.

Those interested in supporting LitiHolo and acquiring a Desktop 3D Hologram Printer have various levels of support and pricepoints available via Kickstarter. Each reward level includes LitiHolo self-developing film plates (20-pack of 2″x3″, and 6-pack of 4″x5″) and optional add-ons such as a hologram display and additional film.

“Holography has evolved a great deal in the 60 years since its introduction and we view our Desktop 3D Hologram Printer as an important next step in bringing this technology to the masses,” said Paul Christie, LitiHolo CEO and MIT Media Lab alumni. “For the first time, the power to create true holograms will be accessible to anyone with one of our printers, which opens up a whole new world of hologram possibilities.”

Beyond recreational use, LitiHolo believes its Desktop 3D Hologram Printer can be a catalyst for holography to impact industries such as architecture, engineering and entertainment.

Development of the Desktop 3D Hologram Printer is a major milestone in LitiHolo’s quest to make true hologram technology more accessible. Previously, LitiHolo produced hologram kits sold nationwide in Barnes & Noble stores as well as a full-color version sold online and at retailers worldwide. LitiHolo also manufactures an array of holography film that allows for hologram production without the use of chemicals.