One week after one of the strongest tropical cyclones in recorded history for the Arabian Sea lashed western India and interrupted vital COVID-19 relief operations, a second tropical threat is brewing for the COVID-weary nation — this time on the country’s northeastern coast.

The COVID-19 death toll in India surged past the 300,000 mark on Monday, making the country just the third in the world to reach the grim milestone. Only the United States and Brazil have recorded more fatalities throughout the duration of the pandemic. According to Reuters, 100,000 of those fatalities have occurred over the last three weeks amid a hard-hitting second wave.

Government officials were calling on farmers to cancel a mass protest set to be held outside of New Delhi, the capital, over fears that it could turn into another super spreader event. Health officials have blamed political rallies and religious gatherings for exacerbating the second wave surge of cases.

Vaccinations and needed COVID relief efforts could once again be interrupted due to the looming presence of Cyclone Yaas.

As of Monday evening, local time, Yaas is a cyclonic storm with sustained wind speeds of around 46 mph (74 km/h) and is located about 305 miles (490 km) south-southeast of Paradeep. The storm is expected to strengthen into a very severe cyclonic storm before making landfall by the middle of the week.

“This type of storm is always a concern due to the susceptibility of this part of India to serious storm surge/coastal inundation as well as flooding from rainfall as well as wind damage, especially closer to the coast,” said AccuWeather Senior Vice President and Chief Meteorologist Jonathan Porter. “However, I am concerned this can easily and quickly become a humanitarian crisis due to the existing COVID-19 disaster.” 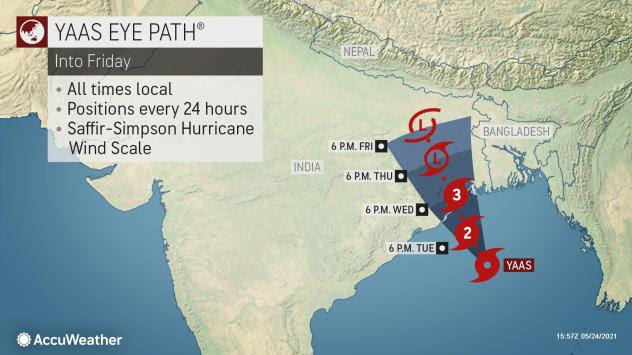 Florida Realtors Recognized as One of Central Fla.’s Top Workplaces

On Sunday, the India Meteorological Department (IMD) announced a well-marked area of low pressure had strengthened into a deep depression over the Bay of Bengal, which is the equivalent to a tropical storm used by the National Hurricane Center for the Atlantic and East Pacific basins. The deep depression strengthened into Cyclonic Storm Yaas on Monday morning, local time, according to the IMD.

On Sunday, Prime Minister Narendra Modi called for the timely evacuation of those involved in offshore activities as he chaired a high-level meeting to review the preparedness of states and central government agencies to deal with the situation arising out of the budding cyclone.

According to the Press Trust of India, the Kolkata Port will suspend all shipping movements on Tuesday as Yaas nears northeastern India.

By Monday evening, local time, 50 people have been evacuated from flood-prone areas to cyclone centers by the local authorities in the coastal town of Digha. Warm water temperatures and light wind shear over the northern Bay of Bengal can allow Yaas to continue to strengthen through early this week.

According to AccuWeather Senior Meteorologist Tony Zartman, Yaas is expected to track north and northwest over the Bay of Bengal.

The most likely location for landfall to occur is near or just east of Paradeep, a city along the coast northern Odisha late Wednesday or Wednesday night, according to AccuWeather Lead International Meteorologist Jason Nicholls.

Florida Realtors Recognized as One of Central Fla.’s Top Workplaces