For the second year in a row, the Atlantic basin will experience an active hurricane season amid a global pandemic, and AccuWeather is here to help residents along the coasts prepare.

The AccuWeather TV network’s 2021 Hurricane Season Special debuted at 8 p.m. Tuesday, and it was hosted by AccuWeather Broadcast Meteorologist Geoff Cornish and addressed safety and preparedness concerns residents of hurricane-susceptible areas may have surrounding the 2021 Atlantic hurricane season.

AccuWeather’s lead hurricane forecaster Dan Kottlowski appeared on the town hall to discuss the forecast for the 2021 Atlantic hurricane season and how it will compare to the year prior.

According to Kottlowski, the current forecast calls for three to five direct impacts to U.S. land this season, including Puerto Rico and the U.S. Virgin Islands.

“This again is going to be a very active season. All the variables that were in place last year are very close this year as well,” Kottlowski said, referring to last year’s record-breaking hurricane season.

He also recommended that people begin preparation for hurricane season now, saying, “Now’s the time to get your plan in order.” Kottlowski added, “Don’t wait until July or August.”

Like 2020, this year’s hurricane season in the Atlantic basin is forecast to be an active one, albeit not as active as last year when there were 30 total named storms. 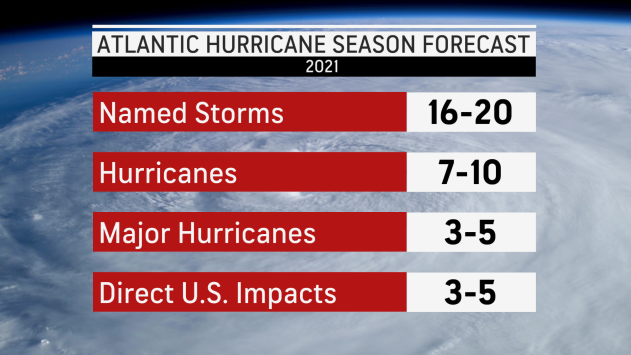 AccuWeather
“It just was a relentless season,” Ken Graham, the director of the National Hurricane Center, said on the special. “Thirty named storms,” Graham marveled when asked by Cornish about last the impact of the 2020 season. “That’s the most we’ve recorded in 170 years of record-keeping.”

Graham also warned residents in hurricane-prone areas to begin considering safety measures for when the tropical weather begins to near the coasts.

Graham urged viewers to take tropical weather events, and the threats they pose, seriously. “I think that’s one major factor, to really take these serious. Because it’s not just a short-term event,” Graham said. “Some of those impacts could last for weeks.”

Discussion also turned to a new feature added to the AccuWeather smartphone app in time for hurricane season. The local hurricane tracker will alert users ahead of time when tropical activity, including hurricanes, are threatening to impact their area. This will allow residents to plan further in advance for tropical activity and provide more time to evacuate if needed.

After last year’s active season, many residents have still yet to recover as the new Atlantic hurricane season has dawned.

Residents in Louisiana are still in the midst of repairs from hurricanes Laura and Delta, both of which brought devastation to the state. Many homes still have tarps, which have a lifespan of only about three months, on roofs.

“If you would have told me a couple days after Laura that we would be where we are today eight months later I don’t know if I would have believed you,” Nic Hunter, the mayor of Lake Charles, Louisiana, said during the special. “Some of the earliest estimates for power restoration, water restoration, debris, they were so scary that it couldn’t even be spoken because the earliest estimates were just so dire.” 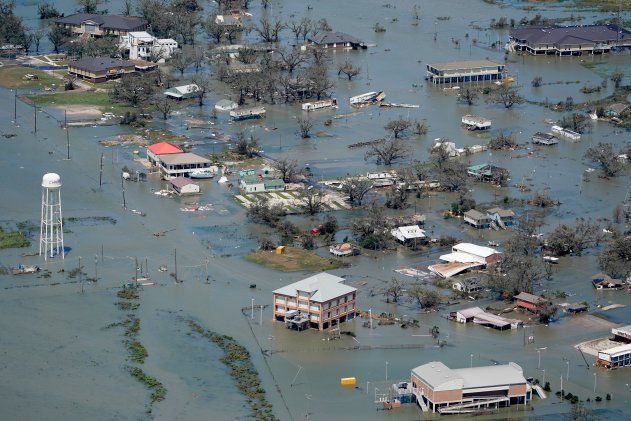 FILE – In this Aug. 27, 2020, file photo, buildings and homes are flooded in the aftermath of Hurricane Laura near Lake Charles, La. One Lake Charles woman credits the power of social media in getting one step closer to having her hurricane-damaged home repaired after weeks of roadblocks with her insurance claim. Less than a week after the videos were posted on the social media app TikTok, Tara Parks said the adjusting firm called her Monday, Jan. 4, 2021, asking what could be done to make her home livable again. (AP Photo/David J. Phillip, File)

Cantrell expressed concern that early-season activity could be a threat to her city. “We are heading to that warning that hurricane season this year will start just a little bit sooner,” she said.

Meanwhile, preparation for hurricane season began early in New Orleans this year, with officials saying they aimed to be ready in mid-May. Hundreds of volunteers got involved with the city-assisted evacuation program.

Avegno said mandatory evacuations are more difficult for people that have disabilities, so the high-risk city surrounded by water is looking into ways to help them through the city-assisted evacuation program.

“For our homebound individuals, for our individuals on dialysis, those in wheelchairs, those with chronic medical needs, those who are having acute medical emergencies, it’s going to be even more difficult to evacuate safely,” Avegno said.

Alongside people with disabilities, the city-assisted evacuation program is aimed at helping people with transportation, medical and financial issues that could impede their ability to evacuate New Orleans themselves in the event of a weather emergency. In a worst-case scenario, that could amount to tens of thousands of people.

“We estimate that roughly 35 to 40 thousand New Orleanians will be unable to leave on their own in the event of a mandatory evacuation,” Director of the New Orleans Office of Homeland Security and Emergency Preparedness Collin Arnold said.

World Central Kitchen, an organization dedicated to monitoring severe weather across the globe and providing assistance where it is needed in the wake of extreme weather, is also preparing for hurricane season this year. Its CEO said the pandemic has altered emergency response operations last year, and they are expecting it to this year, as well.

“I expect we’re going to have a pretty active hurricane season again, unfortunately, as the waters warm up and as the storms get bigger,” World Central Kitchen CEO Nate Mook said. “We’re really getting our teams together now and pre-positioning certain things and equipment and as we’re looking at June 1 and the start of hurricane season, so we can be ready.”