Machine Learning, Big Data and Data Science emerged as the most mentioned trends among the artificial intelligence (AI) influencer discussions on Twitter during the third quarter (Q3) of 2020, according to GlobalData, a leading data and analytics company.

The discussions around machine learning were related to how organizations have reacted to COVID-19 outbreak through digital transformation integrated with machine learning. To maximize enterprise value, companies have started integrating AI strategies with data science.

Among companies, Alphabet Inc. emerged as the most mentioned company among AI influencer discussions on Twitter during Q3 2020.

Smitarani Tripathy, Influencer Analyst at GlobalData, comments: “The discussions related to Alphabet Inc. were largely driven by how the AI system developed by Google Health researchers outperformed general pathologists in validating Gleason grading of prostate cancer biopsies. In July, Google AI claimed to have 72% accuracy in categorizing prostate cells compared to the 58% accuracy of pathologists.”

How AI is Transforming the Insurance Industry

Amazon emerged as another most mentioned company, led by surge in discussions related to the launch of its AI-powered fitness band Halo in August. It was followed by Microsoft, which won the Pentagon’s US$10bn worth Joint Enterprise Defense Infrastructure (JEDI) project in September. The objective of the AI integrated project is to speed up war planning and fighting capabilities. 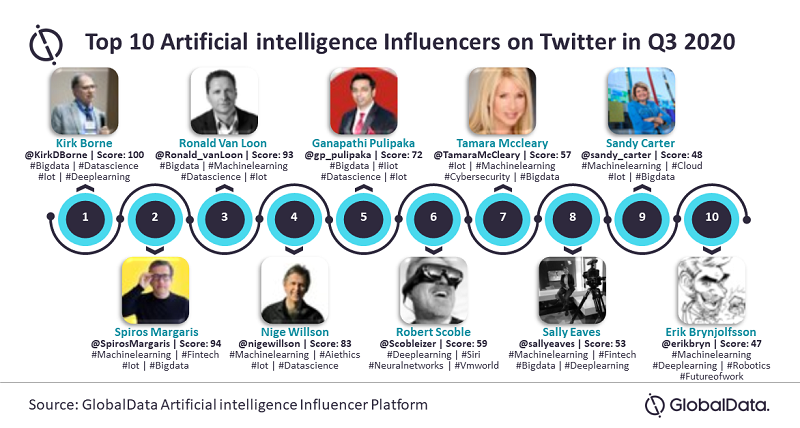 How AI is Transforming the Insurance Industry

HashCash Recognized as the Top Blockchain Development Company in 2021

HashCash’s HC NET to Help an Australian Enterprise in Settling…

HashCash Consultants to Help a USA-Based Bank with Corporate Trade

Jan 21, 2021
Prev Next 1 of 380
Follow Us
We store cookies on your computer to improve your experience and provide more personalized services, both on this website and on other sites. For more information about the cookies we use, see our Privacy Policy. We won't track your information when you visit our site. We will have to use at least one cookie to ensure that you won't have to make this choice again.AcceptDeclinePrivacy Policy