Understanding the First Step Towards Quantum Algorithms: Minimizing the Guesswork of a Quantum Ensemble

Guesswork in any walk of life can negatively affect the resultant outcome of your activity. In quantum ensemble, the guesswork has always been part of quantum detection and estimation of error probability. Data scientists have been trying very hard to derive analytical solutions to the perennial guesswork problem for quantum ensembles. Finally, there is a breakthrough!

Quantum ensemble applies to the rules associated with machine learning algorithms used to construct an advanced ensemble of quantum software. As a reference to modern AI machine learning innovations, a Quantum Ensemble is defined as a set of various quantum states with their probabilities and errors or anomalies, essential for encoding purposes involved in ingesting, transmitting and analyzing the classical supervised and unsupervised information across all quantum channels. 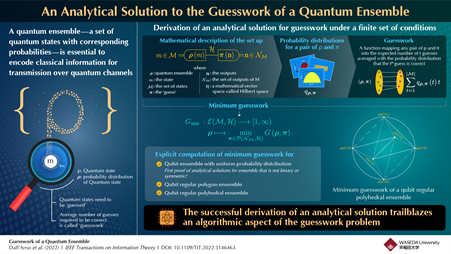 So, what’s an ensemble?

In an ensemble, all the members in the reference plot show the same state or behavior that can be denoted using a “density matrix.” Ensemble methods are considered as better classifiers and unifiers due to their lower variance than the individual classifiers.

Why guessworks come into the picture in a quantum ensemble?

Guessworks are “errors” that are often used to fill in for the gaps arising from the transmission of classical information from source to a receiver. Receivers use guesswork to ensure that all members retain their ‘state’ to fit into an ensemble.

Now, analysts have found the solution to eradicate the need to depend on guessworks, and this would revolutionize the way data scientists construct machine learning-based quantum ensembles. We have numerous examples in the machine learning domains where quantum software rely on conventional concepts associated with quantum superposition, entanglement and interference.

“The concept of the guesswork has been studied at length in classical ensembles, but the subject is still new for quantum ensembles.”

Given the rapid pace at which technology is developing, it comes as no surprise that quantum technologies will become commonplace within decades. A big part of ushering in this new age of quantum computing requires a new understanding of both classical and quantum information and how the two can be related to each other.

Guess the state, or loss track of your computing

Before one can send classical information across quantum channels, it needs to be encoded first. This encoding is done by means of quantum ensembles. A quantum ensemble refers to a set of quantum states, each with its own probability. To accurately receive the transmitted information, the receiver has to repeatedly ‘guess’ the state of the information being sent. This constitutes a cost function that is called ‘guesswork.’

Guesswork refers to the average number of guesses required to correctly guess the state.

Understanding the state of a quantum ensemble

To begin with, the researchers considered a common formalism of quantum circuits that relates the transmitted state of a quantum ensemble ρ to the quantum measurement π. They next introduced the probability distributions for both the quantum ensemble and the numberings obtained from the quantum measurement. They then established the guesswork function. The guesswork function maps any pair of ρ and π into the expectation value of the tth guess (where t refers to the guess number), averaged over the probability distribution of the tth guess being correct. Finally, they minimized the guesswork function over the elements of π and used this result to derive analytical solutions to the guesswork problem subject to a finite set of conditions.

These solutions included the explicit solution to a qubit ensemble with a uniform probability distribution. “Previously, results for analytical solutions have been known only for binary and symmetric ensembles. Our calculation for ensembles with a uniform probability distribution extends these,” explains Koshiba. The research team also calculated the solutions for a qubit regular polygonal ensemble and a qubit regular polyhedral ensemble.

“Guesswork is a very basic scientific problem, but there is very little research on quantum guesswork and even less on the algorithmic implications of quantum guesswork. Our paper goes a little way towards filling that gap,” concludes Koshiba.

While the consequences of these findings may not be immediately obvious, in the future they are sure to have a major influence on quantum science, such as quantum chemistry for drug development and quantum software for quantum computing.

Reference: Title of original paper: Guesswork of a quantum ensemble

DRUID Partners with BARQ Systems to Expand its Conversational AI…