Tech Makes It Possible to Digitally Communicate Through Human Touch

Instead of inserting a card or scanning a smartphone to make a payment, what if you could simply touch the Human machine with your finger?

A prototype developed by Purdue University engineers would essentially let your body act as the link between your card or smartphone and the reader or scanner, making it possible for you to transmit information just by touching a surface.

The prototype doesn’t transfer money yet, but it’s the first technology that can send any information through the direct touch of a fingertip. While wearing the prototype as a watch, a user’s body can be used to send information such as a photo or password when touching a sensor on a laptop, the researchers show in a new study.

“We’re used to unlocking devices using our fingerprints, but this technology wouldn’t rely on biometrics – it would rely on digital signals. Imagine logging into an app on someone else’s phone just by touch,” said Shreyas Sen, a Purdue associate professor of electrical and computer engineering.

“Whatever you touch would become more powerful because digital information is going through it.” 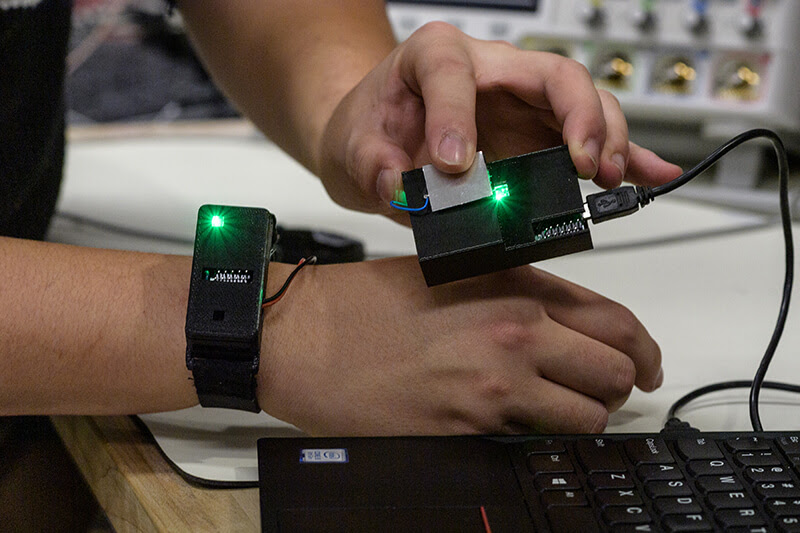 A researcher transfers information from a chip in a watch by touching a sensor connected to a laptop.

The study is published in Transactions on Computer-Human Interaction, a journal by the Association for Computing Machinery. Shovan Maity, a Purdue alum, led the study as a Ph.D. student in Sen’s lab. The researchers also will present their findings at the Association for Computing Machinery’s Computer Human Interaction (ACM CHI) conference in May. A video about the research is available on YouTube.

The technology works by establishing an “internet” within the body that smartphones, smartwatches, pacemakers, insulin pumps and other wearable or implantable devices can use to send information. These devices typically communicate using Bluetooth signals that tend to radiate out from the body. A hacker could intercept those signals from 30 feet away, Sen said.

Sen’s technology instead keeps signals confined within the body by coupling them in a so-called “Electro-Quasistatic range” that is much lower on the electromagnetic spectrum than typical Bluetooth communication. This mechanism is what enables information transfer by only touching a surface.

Even if your finger hovered just one centimeter above a surface, information wouldn’t transfer through this technology without a direct touch. This would prevent a hacker from stealing private information such as credit card credentials by intercepting the signals. 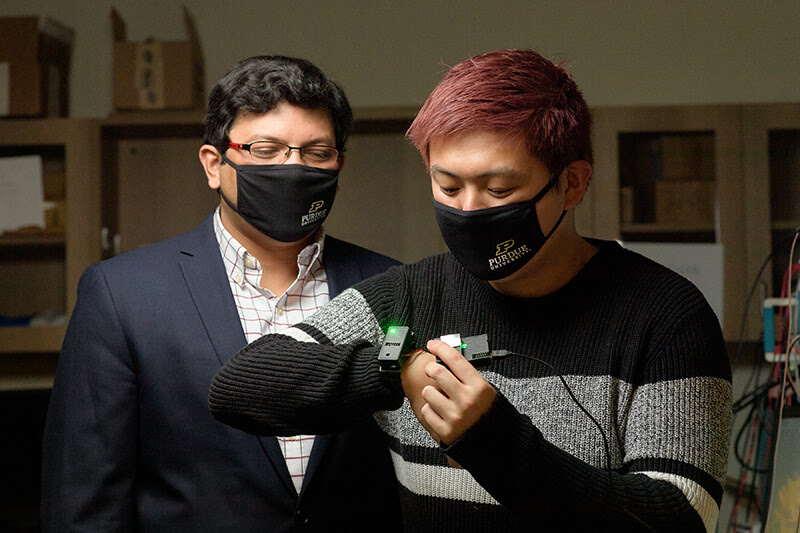 The researchers demonstrated this capability in the lab by having a person interact with two adjacent surfaces. Each surface was equipped with an electrode to touch, a receiver to get data from the finger and a light to indicate that data had transferred. If the finger directly touched an electrode, only the light of that surface turned on. The fact that the light of the other surface stayed off indicated that the data didn’t leak out.

Similarly, if a finger hovered as close as possible over a laptop sensor, a photo wouldn’t transfer. But a direct touch could transfer a photo.

Credit card machines and apps such as Apple Pay use a more secure alternative to Bluetooth signals – called near-field communication – to receive a payment from tapping a card or scanning a phone. Sen’s technology would add the convenience of making a secure payment in a single gesture.

“You wouldn’t have to bring a device out of your pocket. You could leave it in your pocket or on your body and just touch,” Sen said.

The technology could also replace key fobs or cards that currently use Bluetooth communication to grant access into a building. Instead, a person might just touch a door handle to enter.

Like machines today that scan coupons, gift cards and other information from a phone, using this technology in real life would require surfaces everywhere to have the right hardware for recognizing your finger.

The software on the device that a person is wearing would also need to be configured to send signals through the body to the fingertip – and have a way to turn off so that information, such as a payment, wouldn’t be transferred to every surface equipped to receive it.

The researchers believe that the applications of this technology would go beyond how we interact with devices today.

“Anytime you are enabling a new hardware channel, it gives you more possibilities. Think of big touch screens that we have today – the only information that the computer receives is the location of your touch. But the ability to transfer information through your touch would change the applications of that big Human touch screen,” Sen said.

Sen worked with the Purdue Foundry to develop a startup for advancing this technology and exploring possible applications. The prototype has a patent filed through the Purdue Research Foundation Office of Technology Commercialization.