Automated home (home automation) has been generating buzz in the technology arena in line with advancements in the field of Internet of things (IoT). GlobalData’s Company Filing Analytics platform, which identifies and tracks major themes impacting various sectors, identified an increase in the mentions of automated home in the earnings transcripts and filing documents of tech companies from 2016-17 to 2017-18.

GlobalData’s Company Filing Analytics platform, which leverages machine learning (ML) and natural language processing (NLP) techniques to scan filing documents, reveals that the number of companies evincing interest in the automated home theme increased by 8.2% in 2017-18. The total mentions of the term by these companies grew by 22.1% in 2017-18. The increase is in line with the growth in mentions for IoT.

Vaibhav Khera, Director at GlobalData, says: “Advancements in the field of IoT, which offer a new level of control over home appliances due to the element of interconnectedness spanning devices, continue to be a driving force behind the increase in the adoption of IoT devices in smart homes. The automated home is now an important sub-segment of the overall IoT market with several tech giants such as Google and Amazon already making headway and others planning to launch home automation products in the near future.” 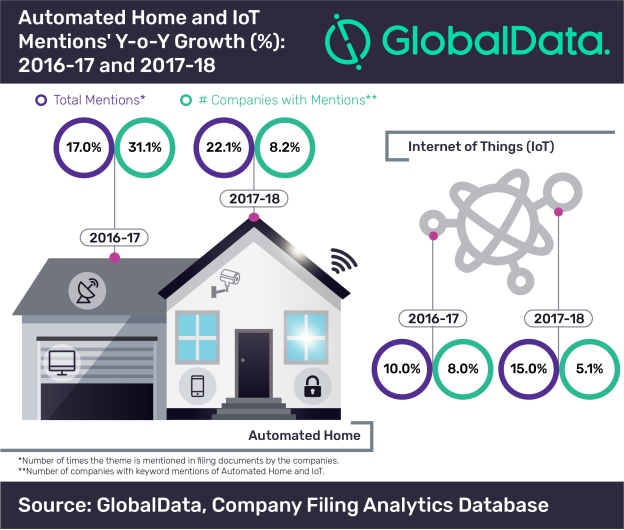 Increasing adoption of smartphones, declining cost of home automation technologies, conducive government policies, concerns over safety and security, and growing awareness about the ability of automated homes to reduce energy consumption are among the major factors aiding the growth of the home automation market.

According to GlobalData’s Thematic Research, the total spending on automated home devices is expected to increase significantly from US$23bn in 2018 to US$75bn in 2025.

Khera adds: “With companies across domains vying for a share in the home automation market, the space is becoming increasingly crowded, forcing tech giants to compete with pure-play vendors, besides telecom operators and the manufacturers of electronic gadgets.”

Among all the technology themes tracked by the Company Filing Analytics platform, automated home surpassed several technology themes such as autonomous vehicles, connected cars and wearable tech in terms of growth in the number of total mentions during 2017-2018.

Khera concludes: “Automated home has a long way to go before it becomes mainstream. Being a nascent market, there are relatively few accepted industry standards and lack of interoperability between products from different manufacturers, which act as the principal barriers to mass adoption. Privacy and data security threats also remain the primary areas of concern.”