The self-driving pilot was a part of the EU-funded SHOW project, with an aim to find out how autonomous vehicles could work as a part of urban transportation in the future.

Finnish self-driving technology company Sensible 4 has carried out a successful autonomous driving pilot in Tampere, Finland, despite the worst and most challenging winter conditions in years.

The pilot, which started in January and lasted for 2.5 months, aimed to see how autonomous vehicles work with public transportation networks and collect feedback from users. Two self-driving Toyota Proace vehicles were used as feeder traffic for the tram trunk line in a suburb of Tampere — a city aiming to pioneer smart city development. The passenger feedback collected was mainly positive and focused on improving accessibility for people with disabilities.

“The self-driving vehicles ran smoothly and felt safe. In the future, I see these kinds of vehicles complementing the public transportation system for certain routes and amounts of passengers. We still need more testing to ensure the reliability in production use, and that the service either brings cost-saving in the areas they are being used or gives better service level to the population with the same costs”, says Mika Kulmala, Project Manager, City of Tampere.

The self-driving pilot was a part of the EU-funded SHOW project, with an aim to find out how autonomous vehicles could work as a part of urban transportation in the future. The project’s national coordinator Pekka Eloranta from Sitowise is also satisfied with the results of the winter trial: “We got a good amount of passengers to try and test the service, even some regular customers. Also, we were able to collect feedback, for example, concerning accessibility. This aspect is important to take into account to be able to provide service to all user groups in the future.”

Also, Jussi Suomela, CBO of Sensible 4 is very satisfied: “This pilot was valuable for understanding the customer and end-user needs better, including especially the accessibility aspects. The weather was exceptionally snowy but the software and vehicles performed well and we were able to collect important test data of the extreme conditions and experience of the challenging weather.” 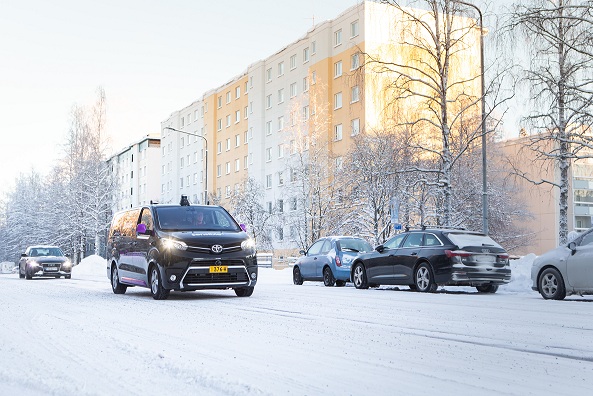 The pilot supported the strategic goal of the City of Tampere to be a pioneer in smart city development and was a successful example of multi-stakeholder cooperation. It also provided lessons and experience for other projects. The Smart City Test Area project aims to strengthen the competitiveness of companies and research institutes in the Tampere city region and it offers companies opportunities to test new services in a real urban environment.

“We’d like to see more activities like the autonomous vehicle experiment in Hervanta. The open living lab test area has been designed and developed according to the needs and interests of testers. Also, there’s a new three-year EU project starting next fall to develop the digital infrastructure in the area further, based on the feedback we’ve already received”, says Markku Niemi, Programme Director, Smart City Development, Business Tampere.

The vehicles were driven in extreme cold, as the temperature dropped from time to time below -20 °C. At other times temperature variation above and below zero degrees Celcius caused the road to be slippery. Heavy snowfalls covered the lane markings and the ploughing brought high piles of snow along the route.

“Of course, in Finland snowing is everyday life in the wintertime. This time it reached almost an extreme level as there were piles of snow on the way and snowploughs had a hard time keeping the roads open”, says Suomela. One of the learnings was how to adapt to a snow ploughing track that in some cases was quite far from the bus stop. Another one is how freezing rain affects the hardware and the third is how to adjust to alternate-side parking.

SHOW Pilot In a Nutshell

Sensible 4 Oy is a Finnish self-driving technology company that has solved a major obstacle in autonomous driving, varying weather. The company develops SAE Level 4 full-stack autonomous driving software that turns any vehicle into self-driving. The unique technology combines software and information from several different sensors, enabling vehicles to operate in all weather conditions, including snowfall and fog.

The founders of Sensible 4 have been developing autonomous vehicles since the ‘80s. In February 2020, Sensible 4 secured 6 million euros in a Series A funding round from Japanese investors and the technology has won multiple awards, including 1st place in the Dubai World Challenge for Self-Driving Transport 2019 competition and the Finnish Engineering Prize in 2020.

Digesting the Cookiepocalypse and the Future with First-Party Data