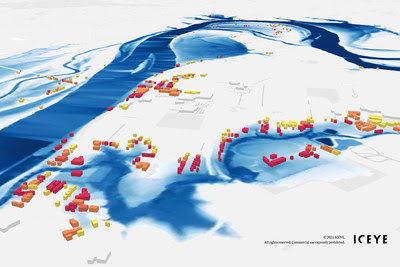 ICEYE is a pioneer in creating solutions relevant for natural catastrophe response with satellite imaging augmented with third-party data and real-time flood analysis. Earlier this month, the company announced a strategic partnership with Swiss Re, one of the world’s leading reinsurers. Through this partnership, Swiss Re is able to generate fast and accurate portfolio and event-level loss numbers for the industry.

The $50M in contracts signed represents relationships with customers in governments and in the commercial sector serving several vertical markets. In order to meet the increased customer demand for data, ICEYE plans to launch more satellites this year than originally forecasted, with a total of 10 new missions. The next launch is booked for mid-2021, including a next-generation satellite with new and innovative capabilities. With these new launches, ICEYE strengthens its delivery of best-in-class persistent monitoring services for its customers.

“We are very excited to see the solutions business growing so fast. The satellites are primarily a data collection tool. ICEYE is a data company and its mission transforms businesses with the use of real-time earth observation,” said Rafal Modrzewski, CEO and Co-founder of ICEYE. “With the momentum built up last year, ICEYE continues as the foremost provider of SAR data and solutions based on radar satellite imaging in the world.”

Alan Thompson, VP Engineering at ICEYE, is a leading satellite radar engineer with more than twenty years at MDA, including ten years as Chief Systems Engineer for the Canadian RADARSAT Constellation Mission. He holds a Ph.D. from MIT.

Shay Strong, VP Analytics at ICEYE, joins the company with over two decades in research and leadership in developing and deploying machine learning algorithms for remote sensing imagery. She holds a Ph.D. from the University of Texas at Austin, and has previously worked at Johns Hopkins University Applied Physics Lab,OmniEarth, EagleView, and Rebellion Defense.

Marita Markkula, VP Marketing at ICEYE, is a growth-driven branding, marketing, comms and business strategist with two decades of experience and high impact in international, commercial teams. She joins ICEYE from F-Secure Corporation.

Susan Repo, CFO at ICEYE, joins with more than twenty years of finance, legal and senior leadership roles, including serving as the finance executive leader at Tesla for five years where she served as VP Finance and Corporate Treasurer as well as CFO for Tesla Finance. She also served on the Board of Directors for Tesla’s global subsidiaries from 2013-2018, including SolarCity during 2016-2017.

Cara Delevingne Enters Crypto With the World’s Most Intimate NFT

Diem Announces Partnership with Silvergate and Strategic Shift to the…

May 13, 2021
Prev Next 1 of 430
Follow Us
We store cookies on your computer to improve your experience and provide more personalized services, both on this website and on other sites. For more information about the cookies we use, see our Privacy Policy. We won't track your information when you visit our site. We will have to use at least one cookie to ensure that you won't have to make this choice again.AcceptDeclinePrivacy Policy