Apps that allow the installer to Monitored the activity on somebody else’s phone were downloaded at least 549,000 times last year

A new study by the cybersecurity company NordVPN shows that, last year, applications that are used to monitor device activity were installed on 549,000 devices across the US. This number is 1% lower compared to the year before.

“Applications like KidsGuard, mSpy, Spy Phone, and Highster are primarily built for parents to monitor activity on their kids’ phones. It allows parents to keep an eye on the communications their minors are having online. Sadly, installed without the owner’s consent, such tools can turn into very powerful spyware to read messages, record screen activity, track GPS locations, and use cameras to see what an individual is doing,” says Daniel Markuson, digital privacy expert at NordVPN.

Globally, there were 5% more monitoring apps installed, affecting over 1,132,262 people across the world.

37% more Americans were suspicious about being monitored

People who are concerned about the possibility of being monitored can easily check if they have monitoring apps installed on their devices by using detectors. It seems that the pandemic and subsequent enforced intimacy last year led to Americans being more suspicious about being watched. The research shows that 37% Americans downloaded apps that help to detect spyware on their mobile devices, compared to the year before. Last year there were 456,982  detectors installed in total.

The rest of the world reacted in quite a similar way by acquiring 16% more spyware detection tools in 2020, compared to the year before.

Where was the need to monitor communications booming?

According to NordVPN’s research, downloads of monitoring apps from official app stores were growing the most in Pakistan (308%), Russia (233%), and Vietnam (212%).

The Netherlands were fourth on the list, installing 176% more apps that take screenshots of messaging apps, track location, and give access to the camera.

American Express and Extend Partner to Enable Virtual Cards for US. Small and Mid-Sized Businesses 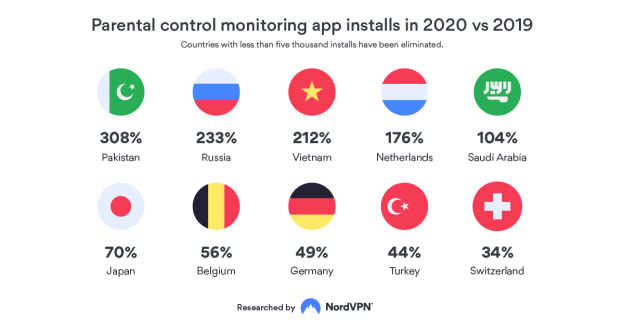 The magnitude of the stalking problem

The US-based National Network to End Domestic Violence found that, in 2019, 54% of domestic abusers downloaded consumer-grade stalkerware or parental control monitors onto their partners’ devices.

“The use of stalkerware steals the victim’s physical and online freedom. Once the perpetrator knows what it is you were interested in and what secrets you shared with the people you trust, they can gain full control of your life and turn it against you,” says NordVPNs digital privacy expert.

According to Daniel Markuson, there are several ways to safeguard your device from an abusive partner. The simplest one is to secure your device against unauthorized physical access, which will potentially stop the perpetrator from gaining access to your device to install stalkerware in the first place.

“Once your device is password-, pattern- or biomimetics-protected, use a VPN at all times. This will prevent the abuser from eavesdropping on your communications through your network,” he adds.

A very important warning to anyone who is in an abusive relationship: if you find parental controls or stalkerware placed on your device without your consent, you should not remove it because this will almost certainly alert your abuser. Seek professional help.

American Express and Extend Partner to Enable Virtual Cards for US. Small and…