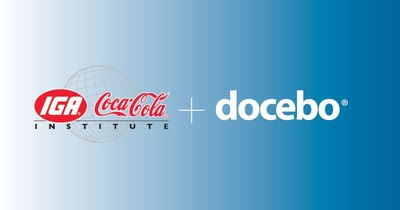 The IGA Coca-Cola Institute is continuing its successful partnership with Docebo after over 6 years of enterprise learning excellence. The company is using Docebo to deliver extended enterprise training to more than 10,000 different independent grocers around the world and reaching more than 247,000 learners.

“Docebo has given us the opportunity to adapt our program to meet our client’s needs and wants in a program that is tailored for them, rather than them adapting to our standard offering,” said Ana Velázquez, Learning Solutions Director at IGA Coca-Cola Institute. “Not only is our program in continuous evolution but also our clients have found room to explore areas that aren’t necessarily part of our standard program.”

The platform has been instrumental to IGA Coca-Cola Institute’s growth across its network thanks in large part to the ease of use and Docebo’s proven track record of digital enterprise learning innovation. The revamp of Docebo’s mobile app Go.Learn, in particular, was met with a strong reception by users and mobile learning continues to rise across their customer base. In 2019, use of the mobile app increased by 69% on smartphones and by 30% on tablets.

Docebo Extended Enterprise has been critical to IGA Coca-Cola Institute’s success as they have set up unique portals for each of their customers and facilitated the implementation every step of the way, helping them to create unique learning experiences personalized to a customer’s branding.

For IGA Coca-Cola Institute, deploying Docebo was a turning point in their growth, providing them with the scalability and sophistication they needed to quickly and easily launch and manage multiple learning projects for their large network of food retailers within a single system.

Thanks to Docebo Extended Enterprise, IGA Coca-Cola Institute has been able to attract, serve and retain large clients that deploy their own corporate universities. They now have 37 corporate universities and more in the pipeline with course completions nearly doubling from 118,887 in 2015 when Docebo was implemented, to 204,117 in 2019.

“We are thankful to IGA Coca-Cola Institute for their long-lasting partnership, established in 2015 when we were a much smaller firm,” said Alessio Artuffo, Docebo CRO. “Since then, we have partnered through many product releases and together made an impact on their diverse learner population.”

Solve.Care Collaborates With Chainlink to Deliver Real-World Data for Blockchain…

Blockchain on a Roll: Is Bitcoin Price Set to Have a 2017-Style…