For the first half of 2018, the Group accelerated its global service layout with its cloud driven digitalization services and continued to improve its overall competitiveness. The Group ranked 7th in the latest “Top 100 Most Competitive Chinese Software Enterprises” (and continues to rise in rankings), and became the backbone of China’s software and ITS development. It plays a leading role in industrial innovation and upgrade transformations of government and enterprise customers.

A. Focus on Large Customers and Promote Comprehensive Strategic Partnerships.

During the reporting period, the Group continued its in-depth partnerships with large customers including Huawei, HSBC, Tencent, Ping-An, and etc. Through its “zero distance” innovative service, the Group understood its customers’ demands better, improved its management capabilities, and increased quality and delivery efficiencies. Furthermore, the Group combined cloud services with its Internet platform to provide Chinese and global enterprises with more capabilities, values, and more smart technologies, creating a new ecosystem in the digital world.

During the reporting period, the Group strengthened its partnership with Huawei, and was named “Huawei Cloud’s Best Partner”. The oversea strategic partnership achieved substantial breakthrough in Malaysia, Myanmar, India, and etc. The Group was introduced into Huawei’s “Service Provider Development Program,” becoming its trustworthy strategic partner.

During the reporting period, the Group continued to strengthen its comprehensive strategic partnership with Ping-An. The Group and Ping-An signed a strategic cooperation to jointly develop the Shenzhen Smart IT project. Furthermore, the Group and Ping-An Insurance continued its in-depth partnership and upgraded the partnership model. The Group will leverage its mobile, big data, and other capabilities to help Ping-An Insurance connect to its clients (precise matching).

During the reporting period, the emerging business, largely represented by JointForce, cloud, and big data businesses, achieved high growth. The revenue of the emerging business was RMB 741.655 million and accounted for 15.4% of the total revenue, representing a YoY growth of 95%. Through the accelerated implementation of the transformation strategy, the Group’s revenue structure and profitability improved during the reporting period. The new generation cloud driven, platform IT enterprise’s value will continue to blossom.

1. JointForce Sees Positive Results, With the Implementation of the “Cloud Integrative Service” Completing Its Ecosystem Blueprint

The JointForce platform has been commercialized for three years now, and has continued to enrich its services, upgrade its business model, and accelerate the growth of its servicing capabilities. JointForce’s resources now span across 400 cities (districts and counties). The volume of the work posted in the first half of 2018 was RMB 1.2 billion, and has completed over 10,000 enterprises’ precision profiling and due diligence. JointForce has truly established a cloud ecosystem focusing in software development.

Focusing on the software service demand of the Government, JointForce launched its “Cloud Integrative Service” solution. This solution, through establishing a cloud integrative service platform, helps the government with IT services, including online purchasing transaction services, due diligence for service providers based on enterprise big data. This solution is being quickly recognized, approved, applied and promoted. It is in operation in Nanjing, has reached a pilot phase in Xi’an, and reached a strategic agreement with the Zhejiang government. Furthermore, JointForce’s “Cloud Integrative Service” team has penetrated the top 50 GDP cities in the country and helped over tens of thousands of software service providers undergo digital due diligence, completing precision profiling.

“Cloud Software Parks” continued to be promoted, serving Jiangsu, Shandong, Hubei, Anhui, Chongqing, Zhejiang, Fujian, and other provinces. There are close to 1,000 people (“army”) there to promote locally and provide local services. In these regions, JointForce software ecosystems are beginning to form.

During the reporting period, the Group focused on intelligent manufacturing. JointForce adhered to the “China Manufacture 2025 Core Integrators” development initiative and formed strategic partnerships with ESI Group (France), Haier, Phoenix Contacts (Germany), Fast, Nari Information and Telecommunication, and other prominent domestic enterprises as well as multiple governments. JointForce and Haier’s COSMOPlat platform will go hand in hand to fully promote the industrial intelligent manufacturing cloud ecosystem. In the virtual prototyping field, the Group migrated ESI Group’s industrial virtual prototype solution onto the cloud and fully realized “Honeycomb’s” intelligent manufacturing integration capabilities. Through cloud, the Group will be able to distribute this solution to the Chinese manufacturers and crease a virtual prototype application ecosystem through “JointForce + Honeycomb”.

During the reporting period, the Group continued to expand in the artificial intelligence and industrial software industries. The Group formed a strategic partnership with the Nanjing Turning Artificial Intelligence Research Institute, founded by Academician Yao Zhizhi. Together they will establish the JointForce Turning Research Institute and accelerate the evolution of AI technology products. Furthermore, the Group will also jointly promote the construction of the “Industrial Software International Cooperation Industrial Base” with the China Electronic Information Industry Association.

During the reporting period, the Group’s cloud line of business grew steadily, successfully realized overseas cloud business layout, and successfully expanded its business scope with Huawei Cloud, Tencent Cloud, and Baidu Cloud. The Group was nominated for 100% third-party service software operation and maintenance supporting project of Huawei’s e-government PaaS platform; it completed Huawei cloud and multiple e-government cloud migration projects, and provided cloud migration service for near 40 users and about 180 application and business systems, with the number of cumulatively migrated cloud hosts over 1,100 and total data volume near 700T. The Group passed the certification of independent software vendor (ISV) of Tencent cloud and obtained Tencent Cloud’s subcontracting channel. The Group successfully developed a cloud deployment solution based on Microsoft enterprise applications. The Group introduced mature Azure-based cloud service capacity, built a joint team with members from China, the US and India, developed the “Hosting” solution of Huawei cloud for Microsoft products, and realized the globalized layout of cloud services. During the reporting period, the Group’s enterprise cloud disk capabilities reached an industry leading position, and expanded its business to Southeast Asia, Africa, and other regions.

During the reporting period, following the strategy of exploring in-depth solutions and focusing on the industry, the Group continued to strive in different industries and won landmark project, continuing to expand its industry leading position. In the banking, securities, insurance, and other sub-segment of the finance industry, the Group will continue to focus on the quality customers, understand the industry need, and continue to upgrade its services. In the airport industry, the Group won the bid for the Beijing New Airport Intelligent Data Center System Project and the Wuhan Tianhe Airport Intelligent Data Warehouse Construction Project. In the public transportation industry, the Group successfully won the bid for the Jiangsu Province One Card Platform data mining project, the Beijing One Card Big Data Platform Project and the Xi’an City Running Big Data Project.

In the first half of 2018, facing the complex situation of the US-China trade war, fluctuation of currency in emerging markets, and the volatility of the stock market, the Group remained resolute towards its strategy. Firmly believing in its strategic transformation, the Group formed an employee owned fund, which increased its shares of the Group during this period, showing the Group’s confident in future business development. This action solidified the capital market’s confident in the Group.

Under the opportunity of the digital China transformation, the Group will, in the future, penetrate the government and enterprise market. Through the JointForce software ecosystem platform, the Group will continue to export new technologies, form new businesses, establish new ecosystem, ignite new motives, and to fully utilize the Group cloud service and top IT design capabilities to drive the Group to optimize the revenue structure and realize business model upgrade. The Group will continue  to become a global IT service leader with comprehensive strength and outstanding innovation capabilities. 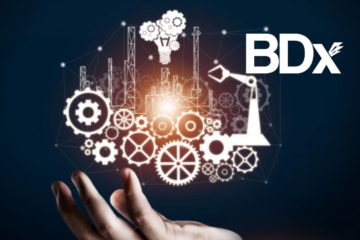 Data Inventorying Increases the Value of Information Assets by 15%, According to Ponemon