According to the latest report on global fintech app usage, the average sessions in investment apps surged 88%, while payment and banking app sessions increased by 49% and 26%, respectively, during the COVID-19 pandemic. It is clear that users are increasingly opting for mobile-based apps to carry out transactions, while complying with social distancing. Users are not only using apps for making payments but also spending considerable time owning the experience through self-service dashboards and contact centers to track their payments. The survey reported that users spend an average of 7.7 minutes per session in banking and payment apps in 2019, but by 2020 that rose to 8.35 minutes, an increase of 8.9%.

Good news for Fintech App makers: the cost of user acquisition in the payments app segment is relatively lower compared to other business apps currently used during the COVID-19 pandemic. There are other critical factors that are driving users and app makers to jointly build a global fintech app ecosystem for new-normal in the world’s disrupted economy.

The report titled, “ The Mobile Finance Report 2020” compares the first half of 2019 with the first half of 2020. Projected as a global benchmark of banking, payment and investment apps, the  data from Adjust and Apptopia data from a cross-section of countries around the world suggest the following trends in app usage for fintech customers.

Activity in Investment Apps, Which Allow Users to Trade Stocks Directly From Their Phone, Is Booming.

With an 88% growth in average sessions per day from January to June 2020. Apps offered by trading platforms such as Acorns, Gatsby and Stash are democratizing investing by making it easier and more accessible. Globally, investment apps are the second-fastest-growing vertical tracked by Adjust in 2020, beating out other hot verticals such as casual and hyper-casual games. 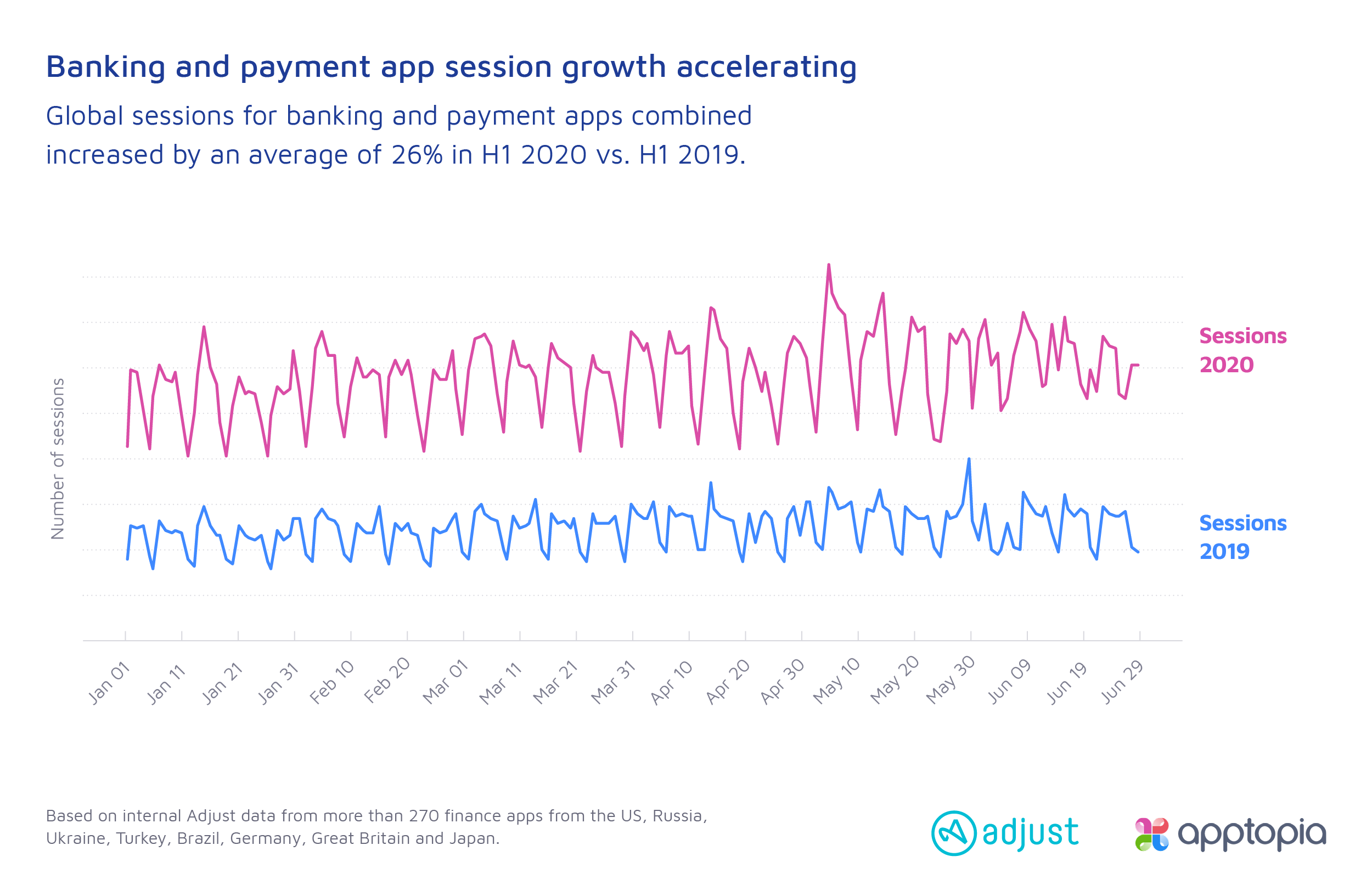 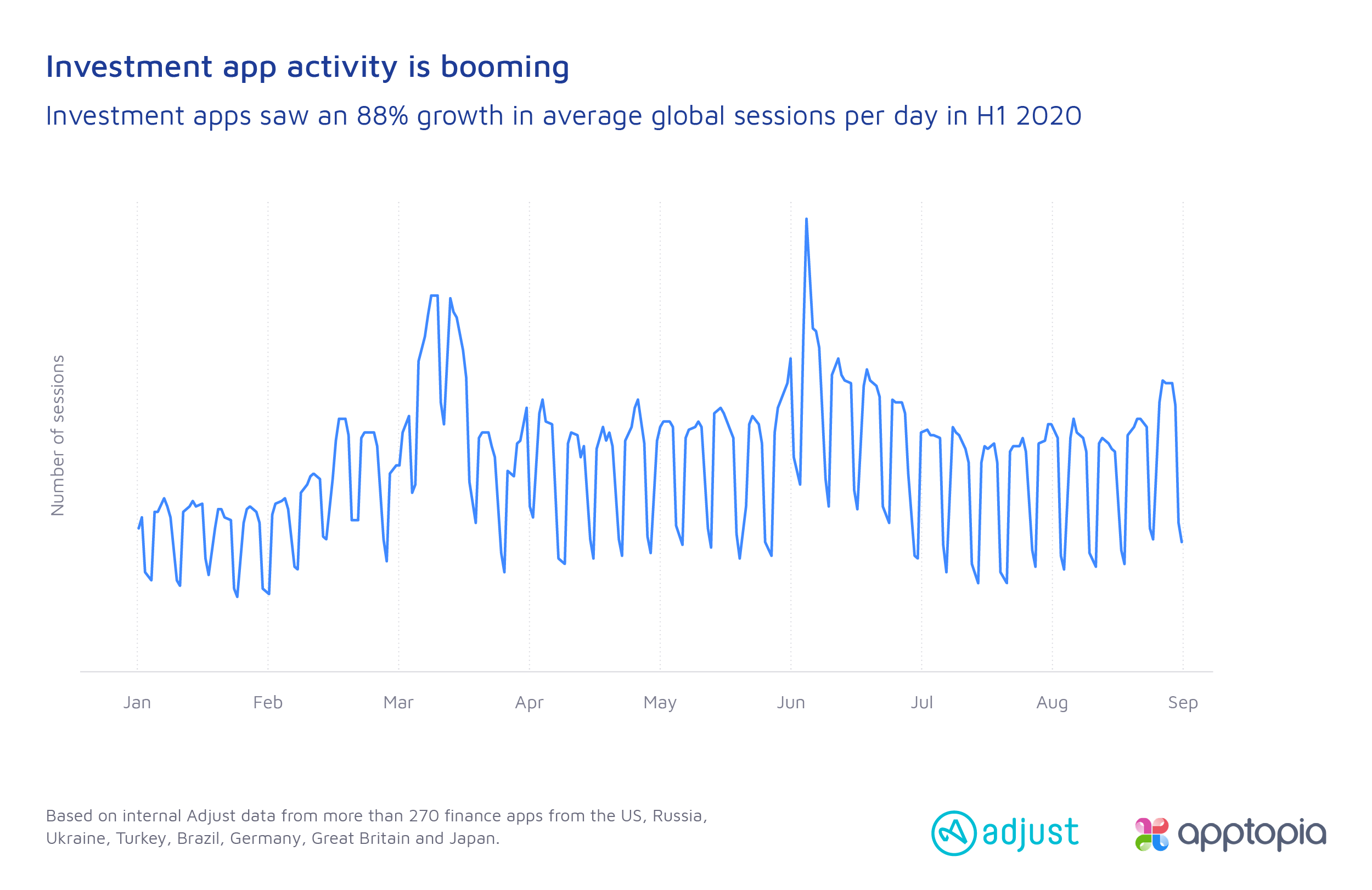 The Number of Sessions in Payment Apps Increased by 49% 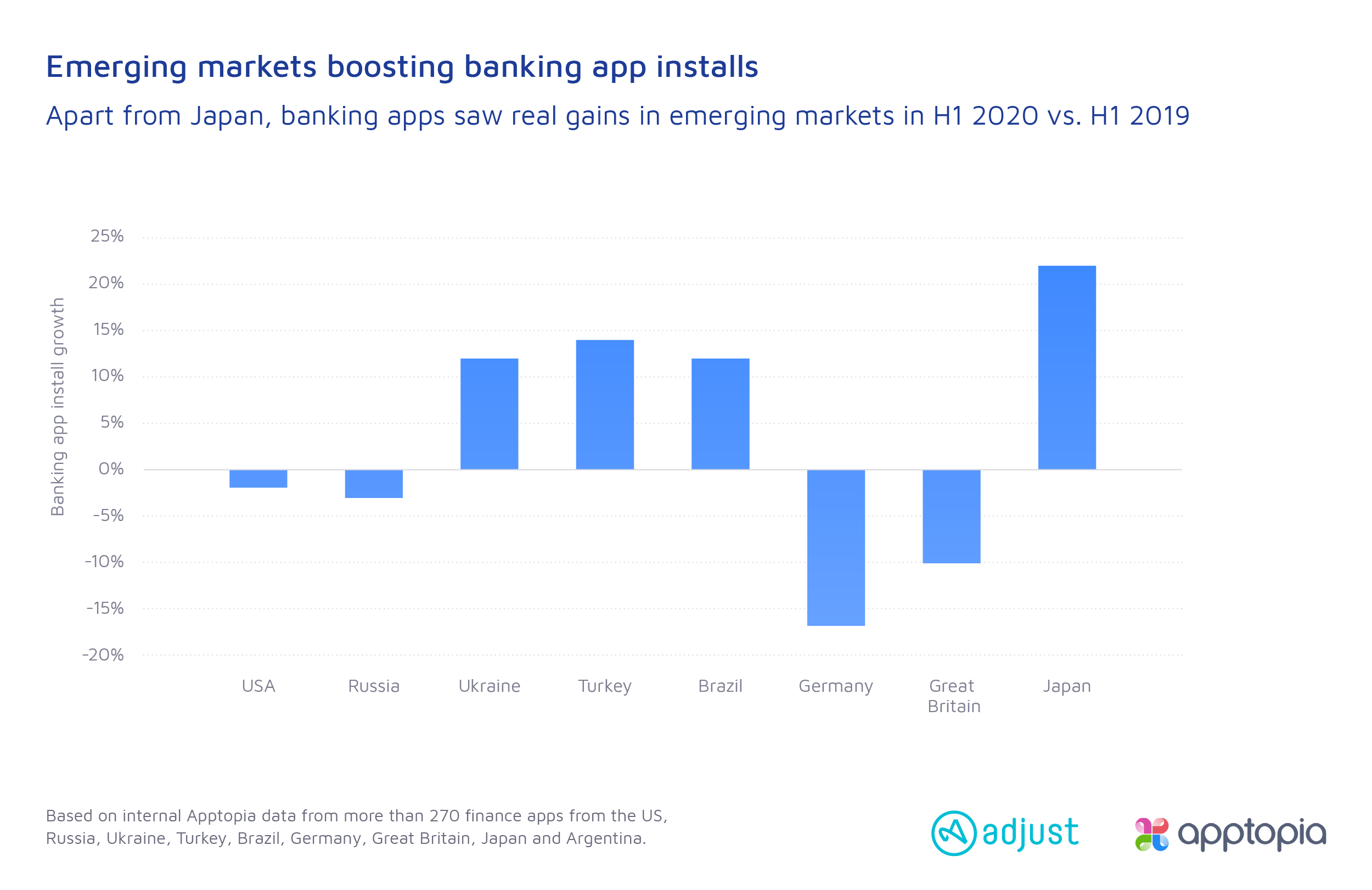 Japanese Fintech App Usage Trend Is Most Striking Among All Countries

Sessions for banking and payment apps combined increased 26% on average across the countries in our survey. While all countries saw an uptick in sessions, stand-out markets by growth rates were Japan (142%), Germany (40%), Turkey (31%), and the US (27%).

The “Super-apps” remain one of the top trends in mobile. Asia gave rise to the super-app via big names such as WeChat and KakaoTalk. But other regions are catching on, with Revolut — for example — pursuing a ‘super-app’ strategy.

“The impact the pandemic has had on banking and the acceleration in mobile digital services should not be underestimated,” said Paul H. Müller, co-founder and CTO of Adjust.

Paul added, “While the banking sector has been adapting to digital disruption for several years, COVID-19 is accelerating the transformation, opening up access and opportunity to millions of un- and under-banked consumers around the world.”

Install Numbers Show Emerging Markets Are a Boost for Banking

Japan leads the pack for banking downloads among the countries analyzed, but is also the outlier. Other advanced economies are seeing falling install numbers over the past 12 months, according to data from Apptopia.

“While broader economic trends suggest it will be a difficult time for top banking apps in general in advanced economies, emerging markets provide an opportunity for international finance apps to continue growth,” noted Adam Blacker, VP of Insights at Apptopia. “Countries such as Turkey, Ukraine and Brazil are where banking is showing the strongest gains.”

Not only have sessions and installs for finance apps increased significantly in 2020, but the amount of time that users are spending in those apps globally is also on the rise. In the first half of 2019, users were spending an average of 7.7 minutes per session in banking and payment apps, but by 2020 that rose to 8.35 minutes, an increase of 8.9%.

Adjust’s data confirms that the most significant growth for time spent in fintech apps occurred in Q2 2020, when regions around the world went into lockdown. Of the countries analyzed, Argentina grew the most in terms of time spent in-app year-over-year in 2020 — soaring 72%. This was followed by Ukraine, with 62%, and then Russia and Brazil, which both increased by approximately 50%. Japan saw a 21% jump.

Acquisition Costs Are Low, With Opportunities for Loyalty

Coinciding with the onset of the economic and social changes wrought by COVID-19, banking and payment apps saw a precipitous drop in user acquisition costs. Starting in February eCPIs (Effective Cost Per Installs) dropped 77% by May, with banking apps still able to acquire users at a fraction of the price they were at the start of the year.

The global mobile finance report draws from Adjust and Apptopia internal data from January 1, 2020 to June 30, 2020, comparing it to data from the same timeframe in 2019. The report analyzes more than 270 finance apps — including banking, payment and investment sub-verticals — from the US, Russia, Ukraine, Turkey, Brazil, Germany, Great Britain, Japan and Argentina. It focuses on the growth of install and session rates, how much time users are spending in-app, and how retention rates perform in this vertical.