Goldman Sachs held the top rank in the latest global mergers and acquisitions (M&A) league table of the top ten financial advisers for the information and communication technology (ICT) sector by value and volume in the first quarter of 2020, according to GlobalData, a leading data analytics company.

The US-based investment bank took the top spot with a deal value of US$24.38bn for advising on 21 deals.

Ravi Tokala, Financial Deals Analyst at GlobalData, says: “The absence of megadeals (>US$10bn) and that there are less than 25 deals crossing US$1bn value in Q1 2020, led to a drop in overall deal value in the ICT sector, which could be attributed to market turmoil caused by COVID-19. With respect to value, only Goldman Sachs was able to cross the US$20bn mark, topping the financial adviser category.

“M&A activities in the sector started on a slow note in 2020, with Q1 witnessing a drop in deal activity, as compared with the same quarter last year. Almost all of the top ten advisers by volume advised less than 15 deals – except Goldman Sachs and Morgan Stanley, which managed to work on 21 and 15 deals, respectively.” 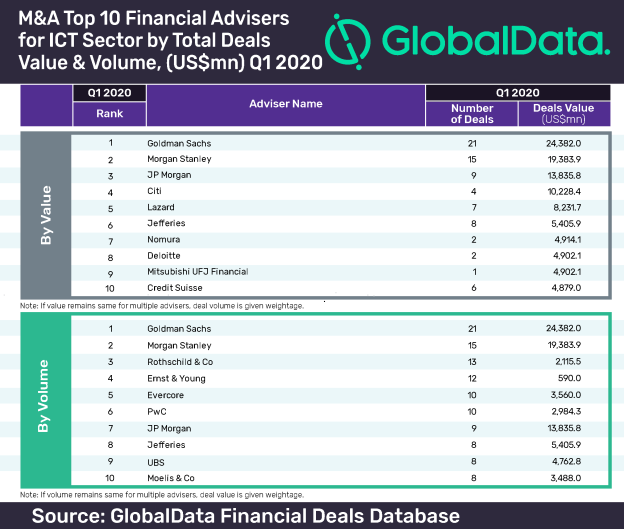