The activation was a Finals Fan Vote campaign where fans were prompted to scan the on-screen QR code during each match broadcast to vote for their player of the match to win prizes.

Seven leveraged the voting templates available from Campaignware’s extensive turnkey digital content template library, with the broadcast integration done in association with major sponsor Coles across each of the first three weeks of the AFL Finals series. 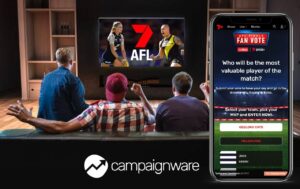 Seven’s finals coverage to-date has averaged 1.08 million viewers nationally. Across the capital cities, it has an average audience of 834,000. The finals games of Australia’s number one winter sport have reached 5.86 million people nationally so far and 4.33 million in the capital cities.

Campaignware’s founder, Adam Mussa, commented on the campaign: “We’re beyond delighted to be working with Seven West Media to showcase our unique digital content creation platform with a well loved broadcaster, and iconic Australian brand. We look forward to more successful partnerships with the Seven West Media team who have been a pleasure to collaborate with.” 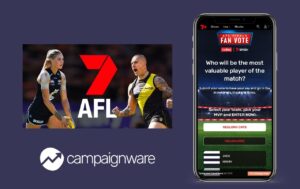 Nicole Bence, Seven’s Network Digital Sales Director, added: “Through this partnership with Coles and Campaignware, we’re able to demonstrate an ongoing commitment to delivering more value and deeper engagement for our partners and audience. Finals Fan Vote capitalises on the superfans of the AFL and taps into the behaviour of “second-screening”, inviting fans to engage in two-way conversation. With so many AFL fans around the country missing the chance to attend the finals in person this year, we created a solution that brings our audiences closer to the cultural moments that AFL is so well known for by enhancing their AFL experience.”

Campaignware has recently evolved from the company formerly known as Benchvote with the digital content tools available expanding in response to heavy demand from small-to-medium sized businesses and enterprise clients alike.

Campaignware have provided their digital content platform for domestic and international clients as diverse as AFL clubs Hawthorn FC and Geelong FC, National Rugby League club Melbourne Storm and Disability Sport VIC in Australia and Wolverhampton Wanderers of the Premier League and Wigan Warriors of the English Super League. Established global brands such as Dell, ViacomCBS and BeIN Sport have also been major clients of the company.