How does Piracy Monitor help content creators, distributors, and the broader media and entertainment industry ecosystem to stay informed about the risks associated with video piracy?

Piracy Monitor was established in 2019 to be a leading advocate to help creative professionals and their distributors preserve their abilities to make a living by protecting against piracy – that is, against theft and copyright infringement.  It also provides a voice for media companies – including broadcasters, studios and TV programmers – and for industry associations working to put a stop to piracy. 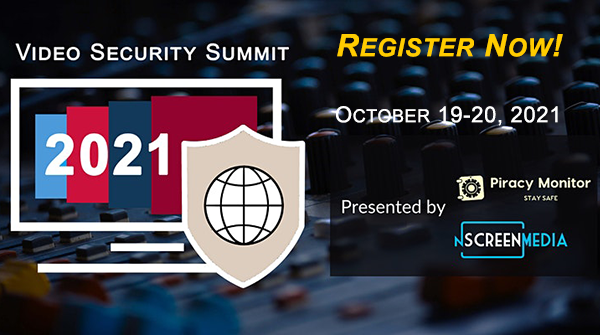 We publish a bi-weekly newsletter with recent piracy- and anti-piracy-related news, including arrests, criminal complaints, new developments by independent piracy-focused industry organizations and about solutions from technology suppliers.

Piracy Monitor also operates a Web site that aggregates market and technology research, technical and best-practices solutions from leading technology suppliers that sponsor the site, and acts as an archive for the newsletter.

Today, what are the most effective countermeasures and best practices to fight it?

Many people expect to be told to adopt new technology, and while that does play a part; number one is to continually assess and update their existing content, distribution and data management security measures, and number two is to listen.  By listening, I mean watching for anomalous situations such as content playing in the wrong place, or coming from unknown sources.  Being alerted when a consumer account suddenly requests hundreds of plays for the same asset.  Monitoring for infringing use involves a kind of monitoring that goes beyond typical streaming analytics which focuses on quality of experience and ad metrics.  And also by “listening” for changes in how pirates operate.

How has the advent of programmatic advertising affected all of this?

In a 2021 report produced by Digital Citizens Alliance and White Bullet, just five such companies push two thirds of advertising to pirate websites.  The situation for ads placed in fraudulent apps is worse: 88% of ads presented to fraudulent apps come through just five aggregators. And interestingly, of those five, two of them – representing more than half of that traffic – are from Google.

Are any of the emerging channels today particularly risky when it comes to piracy?

A huge risk comes through consumer fraud.  This is where bad actors – ranging from the proverbial teenager in the basement all the way to nation-state actors – buy consumer databases for pennies on the dollar, and then use automation to test for account IDs and passwords against media accounts.

The Trustworthy Accountability Group (TAG) is speaking at your event later this month: Can you outline this event and TAG’s role?

The Video Security Summit is the first of what, hopefully, becomes a regular event that’s entirely focused on piracy.  In short, you’ll hear successful strategies and tactics that helped identify and verify piracy, build evidence to prove it, catch the criminals behind it, win in court and influence national policy.

TAG GM Nick Stringer will be joined by White Bullet CEO Peter Szyszko to describe how pirates use stolen advertising to legitimize their fraudulent apps, websites, and illicit streaming services and devices – and how they detect ad-supported piracy and fight it.  Pirates could be using your ads to distract from malicious intent, but advertisers and agencies also hold power to direct their ad spending only to channels that guarantee safe distribution.

How is piracy in the television industry, specifically, changing?

TV piracy has become a major industrialized phenomenon. Hundreds of piracy operations steal live television programming right out from distribution and divert it to millions of consumers every day.  Pirate services offer hundreds, even thousands, of channels for prices that no pay TV or over-the-top provider can possibly match.  It’s their biggest competition. It’s the same for video on demand and broadcast sporting events. Thousands of high-quality assets and live matches are out there.

According to consumer surveys taken in some countries, more than half of consumers knowingly take pirate services, and significant percentages subsequently quit taking pay TV.

Can you give us an idea of the size and scope of piracy today?

There’s a lot of available market data. Our Piracy Monitor Web site maintains a collection of research from industry organizations, market researchers and government agencies around the world.  An estimate published just before COVID by Parks Associates estimated that the value of pirate video services accessed by pay-TV and non-pay-TV consumers will exceed $67 billion worldwide by 2023.

With COVID’s global lockdown, streaming and therefore piracy jumped dramatically, and depending on whose research you read, it plateaued in late 2020 at the higher levels and stayed there, or, it has continued to increase.

Why is it a mistake to regard anti-piracy solutions as just another expense?

Investments in anti-piracy practices and technologies not only help video providers better preserve service revenues. Some originators of high value programming such as sports leagues and movie studios have started to make anti-piracy a requirement and have become more reluctant to license to distributors that don’t invest in it.  There also have been cases where distributors have elected not to carry major programming because the programmers couldn’t guarantee that their distribution would be exclusive due to piracy. It also helps distributors – pay TV, streaming sites and apps – position themselves as safe places to advertise, where legitimate ads don’t appear in fraudulent apps or sites that inflict harm on consumers and can damage a brand’s reputation.

How can technology help to mitigate the risk of piracy?

There are many ways, but the overall concept is that anti-piracy technology used effectively, combined with strong security practices and an organization that is purposely tasked with anti-piracy, can play both an effective offense by finding anomalous distribution and use, and then preceding to mitigation – and by playing defense by plugging gaps in the end-to-end chain that starts at camera lenses and SFX consoles, extends through transport, production and distribution, at the point of consumption, and with the content itself.  Technology also automates the process of applying license and usage rules consistently.

Looking ahead, what are the evolving threats in this landscape? What steps can be taken to minimize these?

Extending on what I said earlier about threats and countermeasures, the techniques used by pirates are always evolving, so a countermeasure that may have been effective six months ago may no longer work.

Also, it’s not practical to think that any single player in the end-to-end media and entertainment value chain should be saddled with all responsibility. In anti-piracy circles, you’ll often hear some variation on the phrase “it takes community to fight piracy.” That’s literally true.  Marketing professionals, their platforms and their partners are all part of that chain.  So, collaboration and teamwork, and some altruism in an aim to help others in the same predicaments.

Even consumer education plays a role. It’s easy to be cynical about this (“Who listens?”), but recent cyberattacks that shut down major social media sites, municipal water systems and national infrastructure have boosted threat awareness.

Another we haven’t mentioned is law enforcement. There is active collaboration across local, regional, national and international police agencies to apprehend and shut down pirates. In one recent case collaboration between Europol and Eurojust, Spanish police, several sports leagues, and ACE (an organization made up of major media and entertainment companies and the Motion Picture Association) shut down an app that was said to be the world’s largest streaming pirate, with 43 million users worldwide.  We’ll hear more about this one at the Video Security Summit on October 19th.

Another is legislation. In Indonesia, law was enacted to enforce shut-down orders against pirates even after they moved their sites or changed domains, so they remain unavailable to consumers instead of popping up again. As of June 2020, the percentage of Indonesian consumers who admitted to accessing pirate streaming sites went from 63% to 28%, according to the Asia Video Industry Association, whose General Manager will be speaking at our Video Security Summit on October 20.

Thank you, Steven! That was fun and we hope to see you back on AiThority.com soon.

[To share your insights with us, please write to sghosh@martechseries.com ]

Steve is managing director of Piracy Monitor, an informational resource to help the media and entertainment industry ecosystem stay informed about the personal, business and technical risks associated with digital media piracy, as well as countermeasures and best practices against it. Piracy Monitor also strives to help creative professionals and their distributors preserve their abilities to make a living by better understanding and protecting against piracy. Sign up for the free Piracy Monitor newsletter (https://mailchi.mp/piracymonitor.org/register-lp )

Steve contributes to the Artificial Intelligence and Machine Learning working group within SCTE (CableLabs), and is a contributing analyst to Parks Associates and S&P Global Market Intelligence. He also is a manager of the Content Protection & Anti-Piracy Group on LinkedIn (https://www.linkedin.com/groups/4369448/).

His consultancy tvstrategies (Advanced Media Strategies LLC), provides expertise in “the technologies that deliver premium video programming, securely, to any screen.” Clients include video service providers and suppliers of content, technologies and services in the video industry.  He has led multi-company teams to build IP video services and platforms, including one that delivers more than 80 channels of live TV and cloud DVR services securely to mobile and fixed streaming devices on a national scale.

Piracy Monitor is an informational resource and category tracking research service with the mission to raise awareness and provide strategically useful information about digital media piracy and its risks. Piracy Monitor publishes a periodical E-Newsletter, a Web site, research and consultation about piracy: what it is, how and why it happens, available countermeasures, case studies, and effective best practices.

Piracy costs the video industry billions of dollars a year, and big media companies aren’t the only ones to suffer. It also hurts individual artists and creative professionals who are simply trying to make a living, and can subject average video consumers to cyberattacks and ransomware without their knowledge until it’s too late.