Creators of an augmented reality app are inviting Angelenos to time travel through vintage views of local Los Angeles history. The developers of ReplayAR released an augmented reality video tour of LA’s historical landmarks and local hotspots made using new technology that virtually anchors historical photographs from the city’s past in the real-life Los Angeles of today. 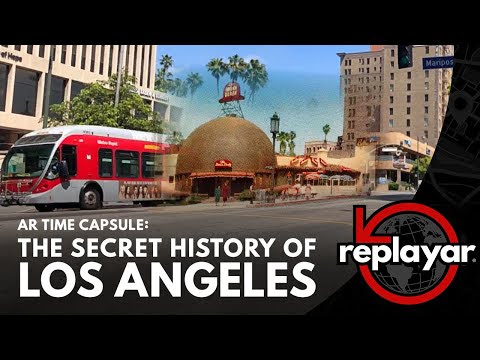 “ReplayAR locks photos in place at any real-world location so others will be able to discover and view them in AR,” said inventor Jay Huddy, who runs the Los Angeles augmented reality startup. “It’s basically Instagram meets Pokémon Go.”

The app lets smartphone users “freeze time” and instantly turn their digital photographs into augmented reality memories. People can also use the app to make videos of their AR creations to share on social media.

“The Secret History of Los Angeles” is part of ReplayAR’s “AR Time Capsule” series which uses the app’s patented technology to explore the hidden history that surrounds us in everyday life. The series previously featured AR history tours of Macy’s Thanksgiving Day Parade in Herald Square, as well as historic tragedies, like the aftermath of the September 11 attacks on the World Trade Center. In its most recent installment, the series used the app to create an AR video tribute to the history of the Cinerama Dome on Sunset Boulevard in Hollywood.

“We want to build a community of AR time travelers who will explore, create, and connect with one and other using the app, like an AR social network,” said ReplayAR co-founder Brandon Martin.

The California-based startup is currently raising a $350,000 seed round from accredited investors to expand its current prototype into a fully-immersive augmented reality social platform that allows users of the app to share and discover each other’s AR experiences all across the globe.

Martin believes this will provide a proactive social experience that gets people out from behind their computers by encouraging them to physically explore the real world around them, see each other face-to-face, and make genuine, real-life connections. He also recognizes ways the technology can provide a unique benefit to local Los Angeles historic preservation— and beyond.

“Ultimately, we see people using ReplayAR as a means to catalog humanity and relive our greatest moments in history,” said Martin. “By allowing us to view images in historical and locational context, AR can uncover universal truths about who we are, where we came from, and where we’re headed.”

ReplayAR’s historical exploration of Greater Los Angeles, along with other video installments of its “AR Time Capsule” series can be found on the company’s YouTube channel and at ReplayAR.com. A single-user version of the ReplayAR augmented reality photo app is now available for free on the App Store for iOS and Play Store for Android.

IBM to Establish New Cybersecurity Center for US Federal Clients