Losing Face: The Rise of the Mask, and What’s Lost Behind It

On Saturday afternoons, the Strip District neighborhood of Pittsburgh becomes a jam-packed hub of old-fashioned shopping. People stride along Penn Avenue, hopping from greengrocer to butcher to fishmonger to Italian market, smiling and gesturing and jabbering as they go.

Not this weekend. As strange, spaced-out lines formed outside favorite establishments, the chatting was muted, the sidewalk sidesteps were awkward and tentative, and the facial expressions were, well, not really facial expressions at all. Just like much of the planet during these jumbled coronavirus days.

Smile, they say, and the world smiles with you. Unless you’re wearing a mask. Then the world can’t see your smile, much less smile back.

The rise of the protective face mask — first in China (where smog and SARS gave rise to its use years ago), then elsewhere in Asia, into Europe and now marching across North America — has abruptly excised half of the face from our moment-to-moment human interactions.

With it has come a removal of crucial visual cues that people have used for millennia to communicate, understand each other and negotiate space in the public arena — to find common ground.

“Our minds light on the face like butterflies on a flower, for it gives us a priceless flow of information,” Daniel McNeill wrote in “ The Face,” his 1998 book on its significance throughout human history. 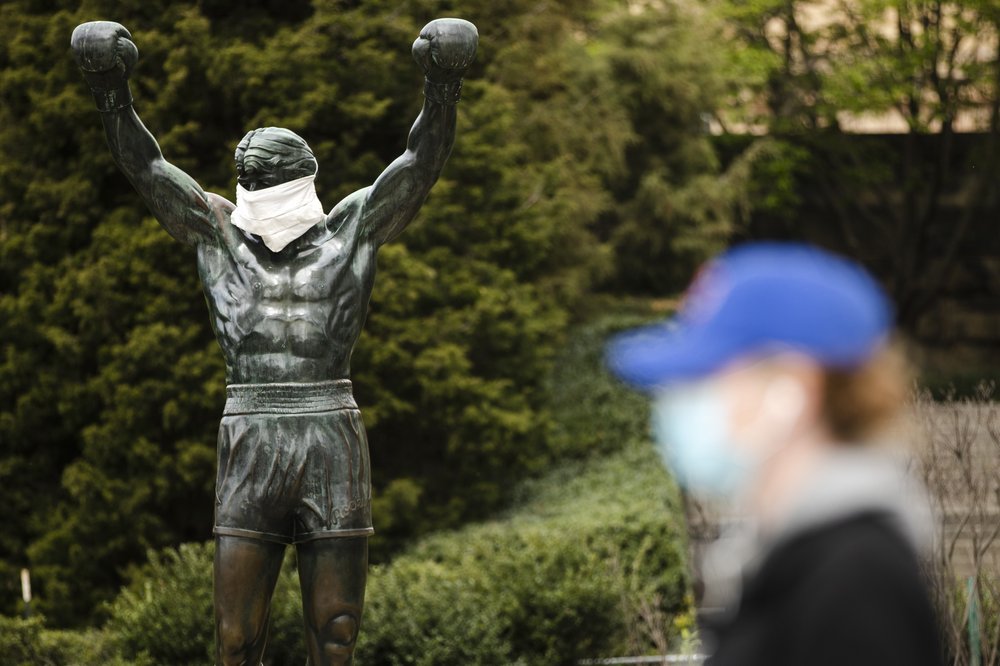 A person wearing a protective face mask as a precaution against the coronavirus walks past the Rocky statue outfitted with mock surgical face mask at the Philadelphia Art Museum in Philadelphia. (AP Photo/Matt Rourke)

A partial inventory of the information that’s lost when the mask goes up: Smiles. Frowns. Lip movements. Crinkle lines at the mouth’s edge. Cheek twitches that indicate approval or disapproval. Reflexive gestures that collaborate with the eyes to say: Hey, I mean no harm. Or: Hey — back off.

“It’s not just covering us up. It’s blocking something. It’s a barrier to communication. Is she smiling? Sarcastic? Is she happy to see me? I can’t figure it out,” says Christie Cawley, a Pittsburgh business adviser whose consultancy, tHRive, helps nonprofits with business skills.

“With the masks, when people are making eye contact, you don’t know if they’re friendly or not,” Cawley says. “It’s a whole communications channel that we naturally have as humans, and it’s kind of dulled — turned off a little bit.”

On Sunday night, new regulations from Pennsylvania’s governor took effect saying that most businesses still open in the state must bar anyone without a mask from entering. Other governments — states and nations — have imposed similar restrictions, which sit atop people’s already palpable desire to shield their mouths and noses from taking in the insidious virus that causes COVID-19.

However legitimate, that still creates a potentially disorienting situation: Instead of a fellow human coming openly toward you, we’re encountering each other with visual cues removed, like astronauts or deep-sea divers or hazmat-removal teams.

Tatiana Datolla, left, and Armando De Rosa lower their protective masks to kiss at the beginning of their wedding ceremony, at the deconsecrated Santa Maria in Tempulo church, in Rome. (AP Photo/Andrew Medichini)

Why Developers Hold the Key to Cloud Security

Nonverbal cues, she says, play a central role in communication that we don’t always realize. “When these cues are cut off, people are more likely to focus on outcome rather than process,” Liu says, and some nuances of human interaction may be lost.

No wonder. There’s a reason why history’s greatest artists didn’t make their names painting shins or elbows or thumbs.

The face is the gateway to who we are, the front door to our humanity and individuality. We mouth off. We have face time (and FaceTime). We pay lip service and give each other lip. We grin and bear it. Are all these going by the wayside … at least for now?

There’s a reason, too, why masks suggest something surreptitious and nefarious. Covering pieces of the face is often presented as shorthand for mistrust or menace across modern culture, from historical literature (“ The Man in the Iron Mask ”) to comic books (“ Batman ”), from TV (“ The Lone Ranger ”) to movies (“ The Mask ”) to music (“ The Stranger ”). 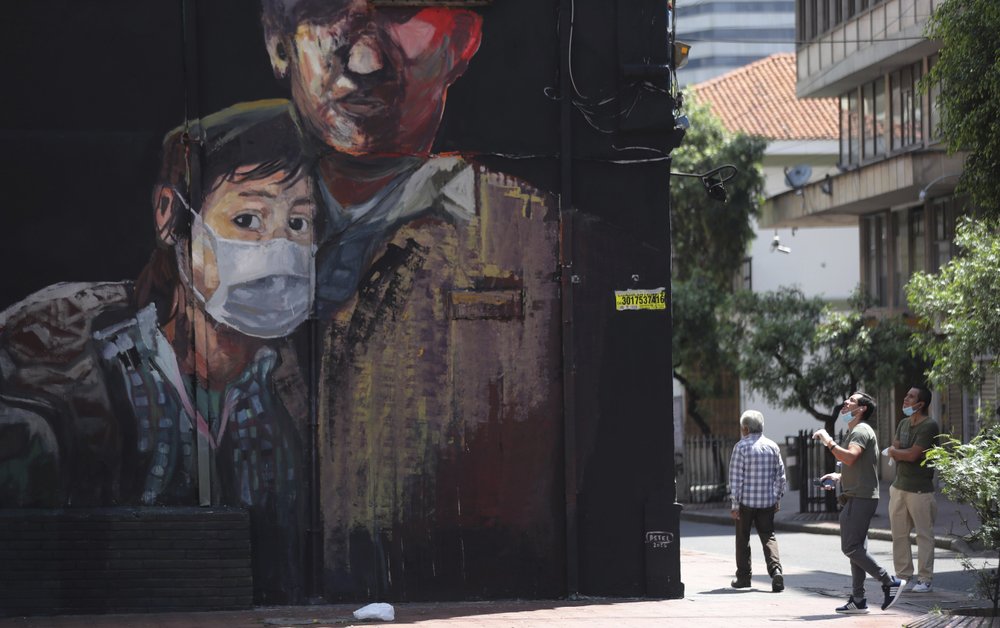 A newly painted mural shows a youth wearing a face mask, during a government ordered lockdown to prevent the spread of the new coronavirus in Bogota, Colombia. (AP Photo/Fernando Vergara)

Such potent cultural cues can be activated, however subconsciously, when we cover our faces — even for the most legitimate (and protective) of reasons. A mask, in short, can be alienating no matter who is behind it — and particularly when there’s a power imbalance in the conversation.

Leah Lizarondo, co-founder and CEO of Pittsburgh’s 412 Food Rescue, says her team’s ability to show empathy has been impeded by its new contactless, mask-forward methods of dropping off food. She recalls meal distributions at Pittsburgh school-bus stops over the past month — done with masks and, she laments, less humanity because of it.

“There’s something extremely surreal about dealing with someone when you can’t really smile. It’s exactly the opposite of what you want this exchange to be. You don’t want it to be a transactional exchange. You want it to be a relationship,” Lizarondo says. “We’re trying so much to create analogues to that empathy. I’m not sure we’re there yet.”

Which raises the question: If this endures for weeks and months, what would those analogues be? If half of the facial radio signal is obscured by face-mask static, how do the messages punch through? Will new methods of socially distanced nonverbal communication emerge?

“The important point is not to rely on any one visual cue. Furrowed eyebrows could mean that a person’s angry, someone’s confused, someone doesn’t have glasses on and they’re squinting,” says Mary Inman, a psychology professor at Hope College in Michigan. 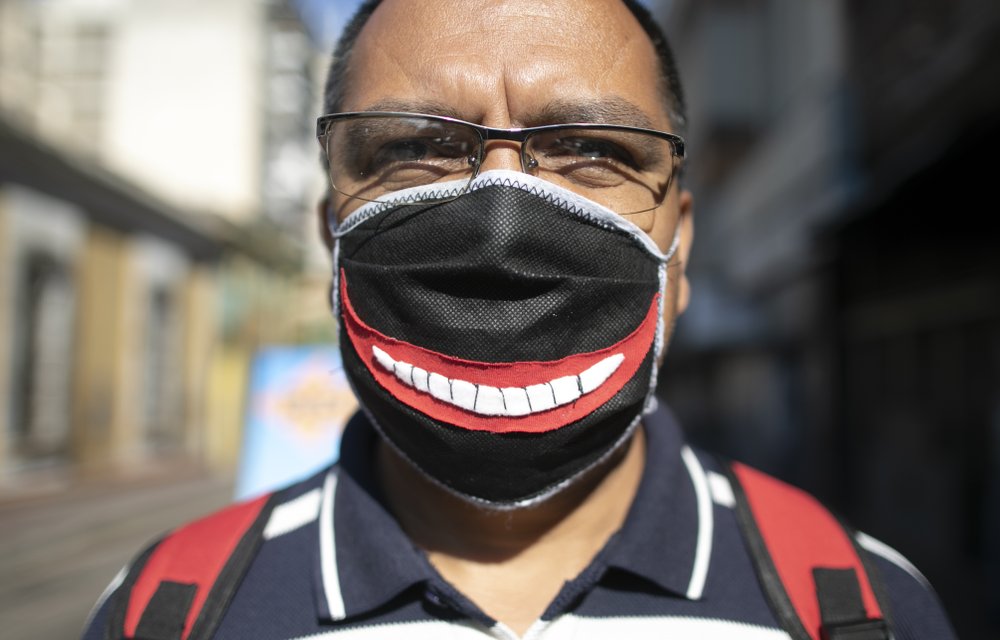 Aman wears a face mask with a smile, to protect himself from the spread of the new coronavirus in Caracas, Venezuela. (AP Photo/Ariana Cubillos)

“So we need to take time and ask people for clarification,” says Inman, who studies people’s perceptions of discrimination. “It’ll slow down communications a little bit, which could be a good thing. … If we go to (wearing) full masks continually, then we will be needing to slow down and clarify.”

You can bet on one thing: Until that happens, things may be awkward. For now, though, we still have the eyes. Have you heard? They’re windows to the soul. But, alas, only to a point.

“The face is the focal point. Now we’ve lost the focal point of that kind of communication. It is going to add a layer of distance between us,” says Dan Everett, a linguist and sociology professor at Bentley College in Massachusetts. “It’s sort of like we’re dogs without tails now.”

Why Developers Hold the Key to Cloud Security