The electric vehicle has come a long way, and Hyundai is comparing its evolution to that of other human innovations in the new national marketing campaign for the all-electric IONIQ 5. The campaign’s theme, “Your journey at its most evolved,” comes to life in two new commercials starring Jason Bateman. 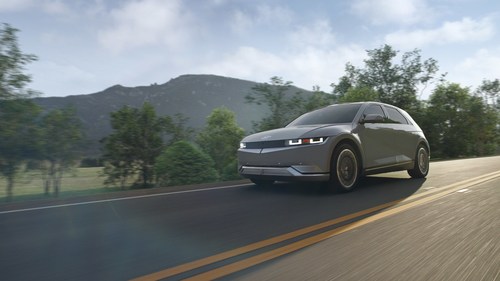 “IONIQ 5 is the ultimate proof point of Hyundai’s evolving journey to deliver innovative, zero emission electric vehicles,” said Angela Zepeda, CMO, Hyundai Motor America. “IONIQ 5’s breakthrough design, advanced technology and more than 300 miles of range represent a significant leap in what it means to drive an electric vehicle. We used humor in this attention-grabbing campaign to compare the IONIQ 5 to other advancements humans have made.”

The 60-second hero spot titled, “History of Evolution,” finds Jason Bateman in different historical eras explaining how initial inventions got better over time. The ad showcases how the IONIQ 5 represents the advancement of the electric vehicle comparing it to the evolution of human language, navigation, phones, and televisions. “History of Evolution” will first air this Sunday during both of professional football’s conference championship games. There are also 15- and 30-second versions for broadcast and digital channels.

Tech Data Partners with Instructure to Amplify the Power of Teaching

The second spot, “Campsite,” is a 30-second ad that highlights IONIQ 5’s vehicle-to-load function that can power equipment to make camping much more comfortable.

“History of Evolution” and “Campsite” will run on high-profile national programming, such as black-ish, The Bachelor, and NBA and NCAA games through May.

The IONIQ 5 marketing campaign was developed in collaboration with Hyundai’s agency of record, INNOCEAN USA, while its media agency, Canvas, coordinated the media buys.

Tech Data Partners with Instructure to Amplify the Power of Teaching