The Third Wave of Video: How Understanding Micro Changes in Human Behavior Can Improve the Effectiveness of Video Ads

Consumers’ video watching behaviors have changed drastically over the last five years but the advertising industry has been slow to adapt. As a result, consumers are paying less attention than ever to most video ads even as advertiser investment skyrockets across linear and connected TV, desktop, and mobile. The good news is that by understanding even a few micro-changes in video watching behaviors, ad buyers can learn a few simple tactics and strategies to improve video ad effectiveness.

Recommended: Predictions Series 2022: Early Days of Big Data Are Over and What it Means for Marketers

“Watching a Video” Is an Interplay of Three Sensory Inputs

The internet changed a lot of watching behaviors but it was the growth of YouTube that really catalyzed a major change in video watching behaviors that started the Second Wave of Video. First and foremost, it meant attention was way more divided. Consumers had multiple windows open as they watched videos and chatted with friends on AIM. Sometimes the TV was also on, but its sound often faded into the background.

Then, came the smartphone and a fundamental change to how we consume content.

As every social and publisher site became infinite feeds of content where videos start on mute, a new sensory input has emerged: reading.

The act of “reading” a video has increased because 75% of people now rarely unmute their phones when a video plays. And that muting behavior has even impacted the way we watch videos on other screens where up to 62% of adults rarely even unmute videos that play on their computer.

Phones have also significantly pulled attention away from the TV.

Since attention is divided, it is also harder than ever to force an audience to pay attention to video ads on any screen since 90% of people either find a way to skip a pre-roll ad (ORC International) or 49% will open another tab or window.

So if attention is divided, sound is often off and most consumers cannot be interrupted with ads, how can advertisers ever expect consumers to pay enough attention to comprehend their message? 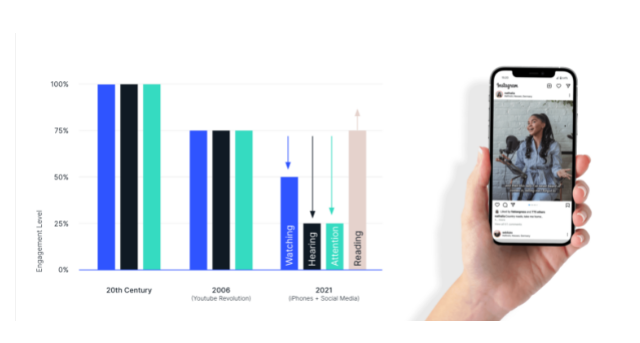 The growth of our need for captions definitely grew from the rise of mobile video watching behaviors but it has even started impacting our TV watching behaviors since now over 50% of adults under the age of 45 almost always keep captions on while watching TV.

A stat that is now cemented as fact since it reached meme status.

How can advertisers adapt?

One of the simplest ways advertisers can adapt is by adding captions to all their video ads.

Consumers are 56% more likely to comprehend video ads with captions versus videos without captions. Some platforms have made it very easy to add captions through AI such as Instagram, TikTok and Youtube. Video ads that run on the rest of the web, however, are just as important to include captions but have less automated options to add them. So it is best for advertisers to either embed captions into their videos or work with exchange partners that can add accurate captions for you.

Put yourself in your customers’ shoes

Look through your media mix and consider what people would do when your video ad appears. For instance, considering 90% of consumers will skip your pre-roll ad, ensure that within the first five seconds your videos either capture users’ attention or convey your message.

On TV, if 78% of people pull out their other device during a commercial break, how will you pull your audience’s attention away from their phone?

So far, no consensus exists on the best way to pull attention away from the phone and back to the TV but we are in the process of testing a few theories including CTV ad enhancements like captions, QR codes, quizzes, in-content breaks and more.

Diversify your mix of video environments

Those three simple tactics alone will go a long way towards adapting an advertiser’s video ads to modern video watching behaviors. That is until video consumption shifts into virtual reality in the metaverse and we find ourselves in the Fourth Wave of Video. But we’ll save those predictions for next time.